A picture is worth a thousand words. This is clearly true in medical diagnosis. Indeed, medical imaging has become a powerful tool in the diagnosis and treatment of illness. Over the past seven years, the team in the Biomedical Imaging Laboratory, established by the Faculty of Science and Technology (FST), has worked relentlessly in this field, producing encouraging results that have garnered international recognition. Prof Greta Mok, founder of the laboratory, hopes to apply artificial intelligence (AI) and other related technologies in nuclear medicine to improve diagnosis and treatment of medical conditions for Macao residents.

Prof Mok is an associate professor in the Department of Electrical and Computer Engineering and a joint associate professor in the Faculty of Health Sciences. She is the first native of Macao to become a medical imaging scholar in Macao. At age 18, she left Macao to pursue higher education at Yang-Ming University in Taiwan. After graduation, she was admitted by Johns Hopkins University in the United States, a universally acclaimed institution in the fields of medicine and public health. She is also the first Macao native to obtain a doctoral degree at JHU. She was later recruited by the Chinese University of Hong Kong as a junior faculty member before returning to Macao to join UM in 2010. Two years later, in 2012, she founded Macao’s first Biomedical Imaging Laboratory.

In nuclear medicine, patients are given small amounts of radioisotope-labelled drugs either orally or by injection. The radioisotopes then circulate through the body and are absorbed specifically by target organs or tumours under examination. The isotopes undergo radioactive decays and emit gamma rays from within the body, which are captured by a gamma camera to create images. By reconstructing and analysing these images, doctors can assess organ functions, tumour location, disease progression and staging, and effectiveness of the treatment. Prof Mok says that organ movements, such as the beating of the heart or the inflation and exhalation of the lungs, can sometimes lead to artifacts, which can degrade the interpretations of imaging results.

The research team currently focuses on the development of nuclear medical instrumentation, methods of medical image generation, and subsequent processing and analysis, with the aim of making medical images of the brain, heart, liver and other organs more accurate, in order to improve the medical diagnosis and treatment of cancers. ‘Take the brain for example. We can’t directly assess the brain functions from the physical examination,’ says Prof Mok. ‘There are a lot of diseases such as Parkinson’s disease and dementia that don’t have obvious symptoms before the onset of the diseases. So the best way to detect disease pre-emptively is to use non-invasive medical imaging techniques, and nuclear medicine has obvious advantages over other imaging technologies in this application.’ In the assessment of a tumour, the doctor can prescribe a positron emission tomography (PET) scan, where glucose labelled with radioactive fluorine is injected into the patient’s body. Since the malignant tumour usually absorbs more glucose than normal tissues, the doctor can pinpoint the location of the tumour and assess the severity of the condition by detecting and quantifying the unusually ‘bright spots’.

According to Prof Mok, the lab currently has three major research projects. The first is the development of an active breathing controller to remove respiratory artefacts and related image acquisition and post-processing software. When the patient is scanned, this controller can suspend the patient’s breathing while collecting images, thereby removing respiratory artefacts, improving the quality of imaging, and enabling more accurate quantification of the lesions. The second project is to design and develop a multi-purpose, multi-pinhole collimator that can collect more gamma photons than traditional single-pinhole and parallel-hole collimators. This collimator can enhance the sensitivity of the scanner, which can in turn reduce image noise, radiation dose or scanning time. The lab has commissioned a Dutch company to customise a prototype of the collimator. The device has already been installed on the lab’s single-photon computed tomography (CT) scanner and is undergoing further evaluation.

In addition to diagnosis, radioactive drugs can also be used for treatment of cancers, which is exactly the focus of the lab’s third project. The lab has developed a piece of 3D computer software for internal dose calculation in targeted radionuclide therapy. It can be used to evaluate the radiation dose absorbed by the tumour and various organs, an important index for treatment efficacy and potential toxicity. Hospitals and research institutions can apply this software to optimise dose calculation for each individual patient, so that treatment planning could be more precise and personalised.

Under the leadership of Prof Mok, the lab has trained over a dozen postgraduate students from Macao and mainland China, who are now working at universities, industries, and medical institutions in Macao and other parts of the world. Among them, doctoral students Zhang Duo and Sun Jingzhang foresee enormous potential in applying AI technology to medical imaging research.

Over the past few years, under the guidance of Prof Mok, Zhang has published some papers on medical image correction, including one paper that examines the effects of different respiratory patterns on medical images. During his doctoral study, Zhang was recommended by Prof Mok to work as a visiting scholar for one year at the University of Massachusetts Medical School and Yale University in the US, where he participated in cutting-edge research. ‘I gained a lot from working at Yale. According to my supervisor at Yale, I did in one month what other students did in one semester,’ Zhang says. Because of his outstanding performance and the solid grounding in research he developed at UM, Yale’s supervisor invited him to be a postdoctoral research fellow at the university, but he had other plans. ‘Our lab is in close contact with research institutions in the Greater China region, Europe, and the US, and we also collaborate with institutions in the Greater Bay Area, such as the Chinese University of Hong Kong and Shenzhen Institutes of Advanced Technology of the Chinese Academy of Sciences. I plan to find a job at a university in the Greater Bay Area after graduation, because I see great potential for career development in this area. It would also be more convenient for me to keep in close research contact with Prof Mok.’

Sun Jingzhang, another of Prof Mok’s PhD students, has both a bachelor’s and master’s degree in computer science. One of his research projects at UM involves using artificial neural networks to reduce noise in medical imaging. ‘I have a background in computer science, and I used to study image processing. There aren’t many people doing research in this area, so I want to explore more,’ he says. Sun now uses deep learning techniques to try to tackle some challenging issues concerning medical image quality.

The research results from the lab have been applied on more than 50 patients in Taiwan and the US to improve their medical diagnosis. The team has also won many awards at international conferences in recent years. At the Third Asian Nuclear Medicine Academic Forum in 2017, the team stood out among strong research groups from Asia and won the sole first prize in the Fourth Rising Nuclear Medicine Professional Challenge, the highest honour of the forum, for their work titled ‘A Framework for Improved 3D Personalised Targeted Radionuclide Therapy Dosimetry Using Registration on Sequential ECT/CT’. It was the first time that a team from Macao had won this award. The same project later received the International Best Abstract Award and the third prize of the Computer and Instrumentation Council (CalC) Young Investigator Award (YIA) at the 64th Annual Meeting of the Society of Nuclear Medicine and Molecular Imaging held in Denver, Colorado, US in the same year. It was the first time a research team from the Greater China region had been shortlisted for, much less received, an award in this YIA category. Two other notable teams shortlisted for this award were from Stanford University and MD Anderson Cancer Center.

The Year 2018 continued to be a fruitful year for Prof Mok’s team. At the 65th Annual Meeting of the Society of Nuclear Medicine and Molecular Imaging (SNMMI) held in Philadelphia, Prof Mok received the International Best Abstract Award for the second consecutive year for her work titled ‘Comparison of Different Tc-99m-MAA Imaging Protocols for Y-90 SIRT Treatment Planning’, as well as the Tracy Lynn Faber Memorial Award, in recognition of her major contributions to high performance Emission Computed Tomography and Computed Tomography instrumentation, reconstruction, and analysis. She is the first Chinese scientist to ever receive this prestigious award.

It is not easy to build a lab from scratch. Prof Mok says, ‘I am very grateful to my team and my students for their support. I am also grateful to the university for its trust and to the international and local societies for their recognition. Because of them, our hard work over the years has not been in vain. Everyone in the lab puts their hearts and souls into what they are doing. They are full of dreams and they are passionate about their research. I hope the fruits of our research can be applied in Macao as well. Hopefully we will increase collaborations with hospitals in Macao to let local patients be the first to benefit from our technology. Our goal is to bring real changes in the diagnosis and treatment of illnesses for local residents using medical imaging technologies.’ 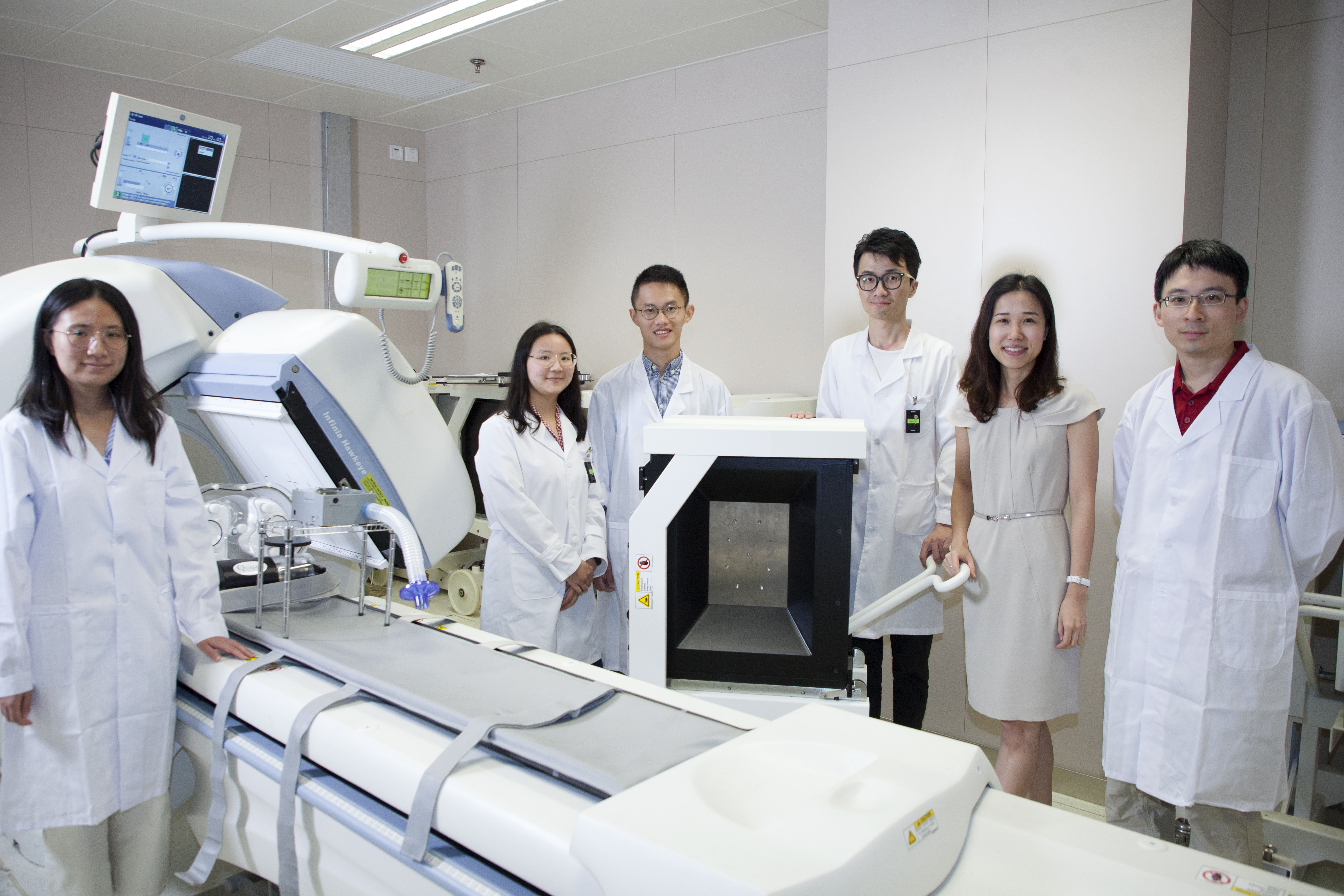 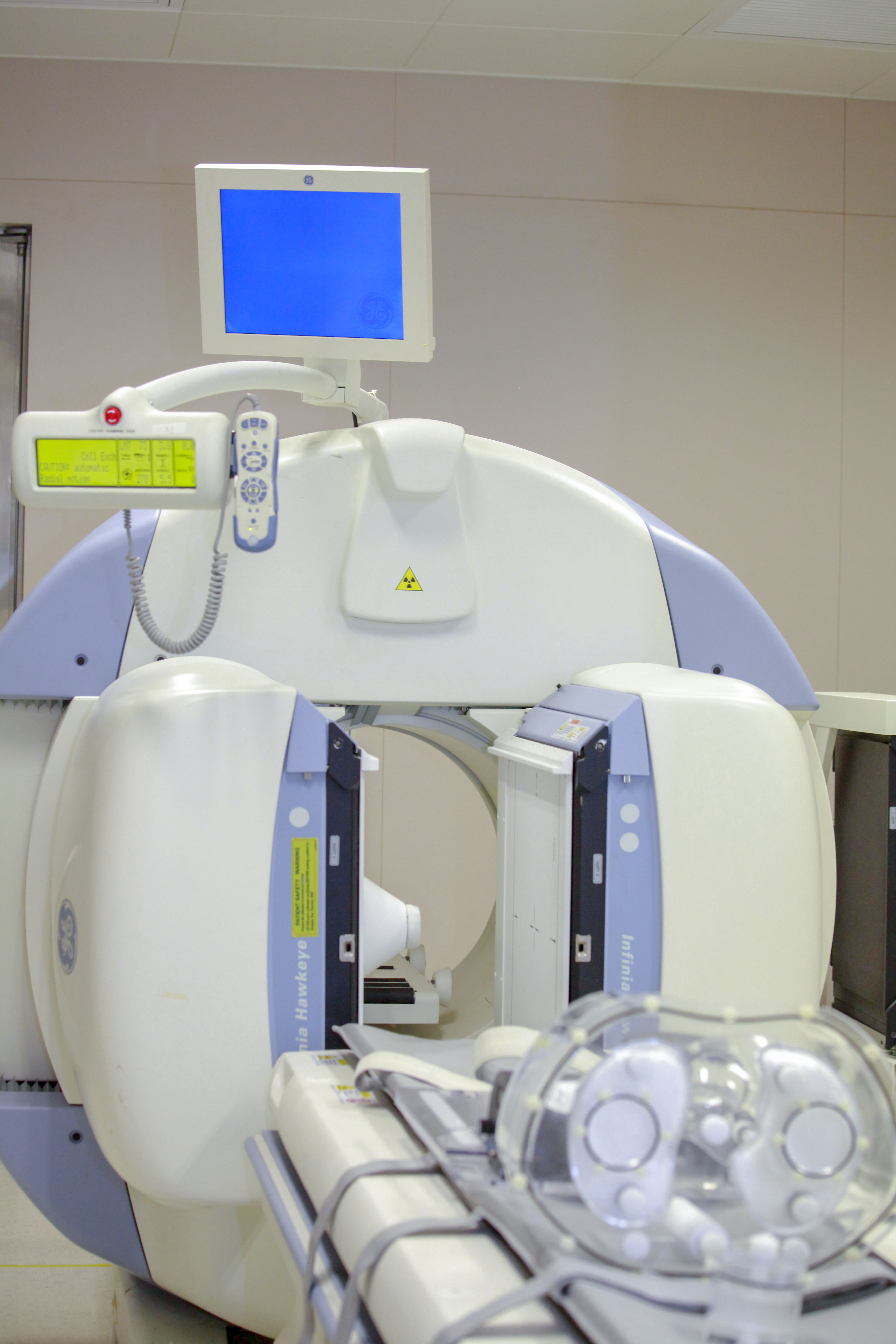 The lab has a SPECT/CT scanner, which was donated by Kiang Wu Hospital 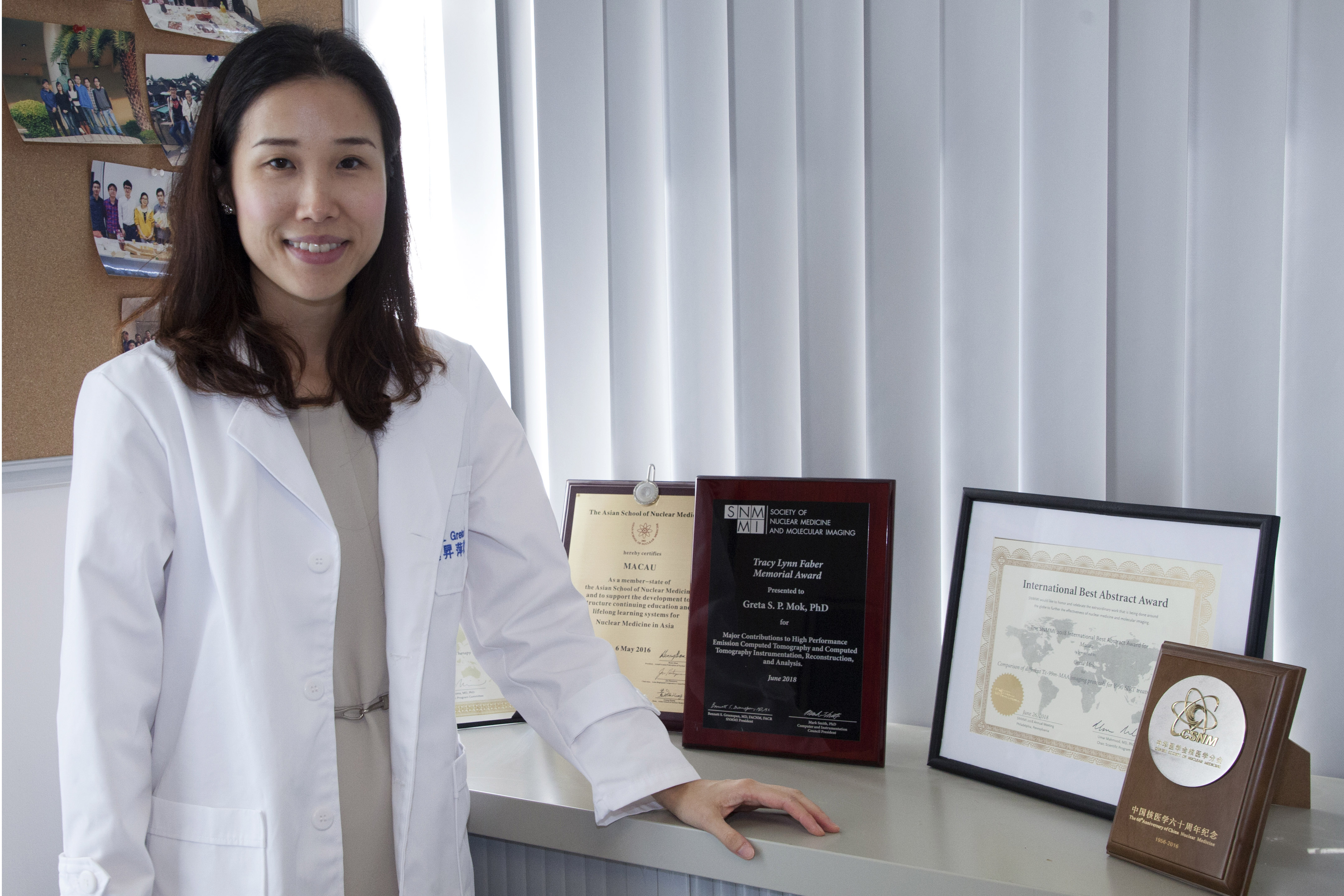 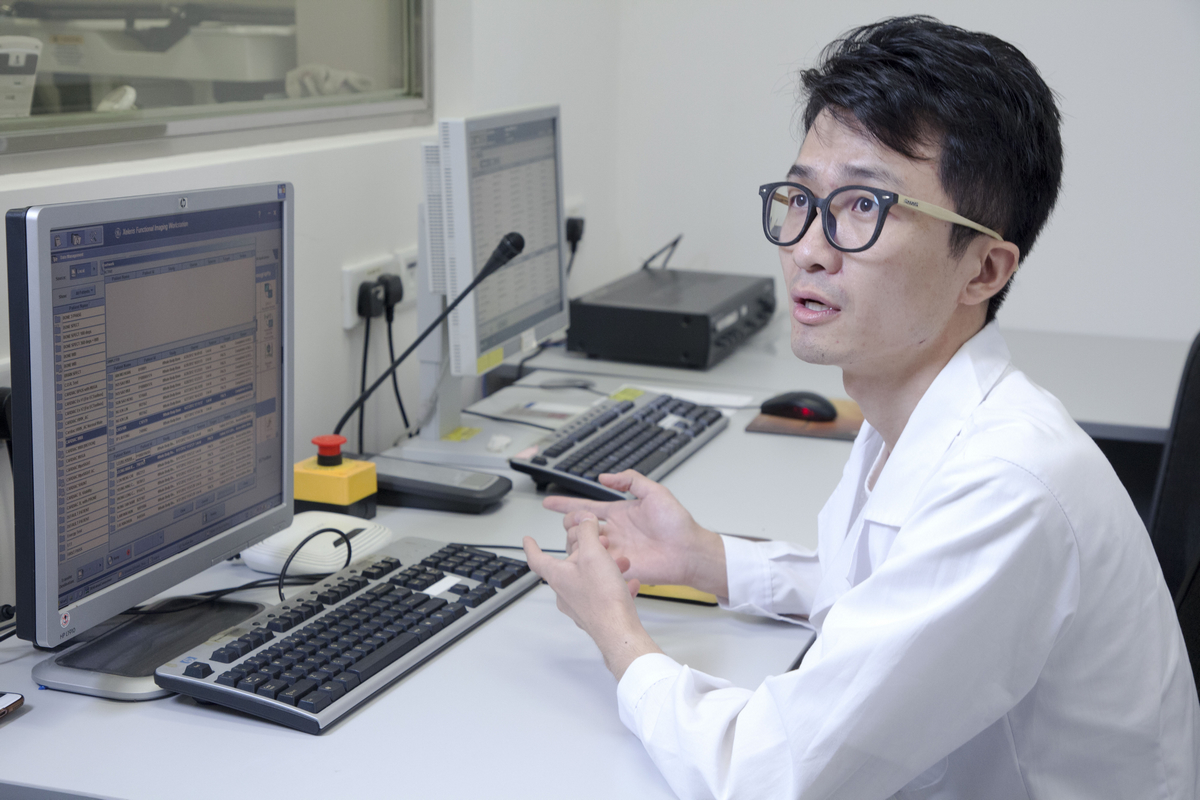 During his doctoral study, Zhang Duo was recommended by Prof Mok to work as a visiting scholar for one year at the University of Massachusetts Medical School and Yale U, USA 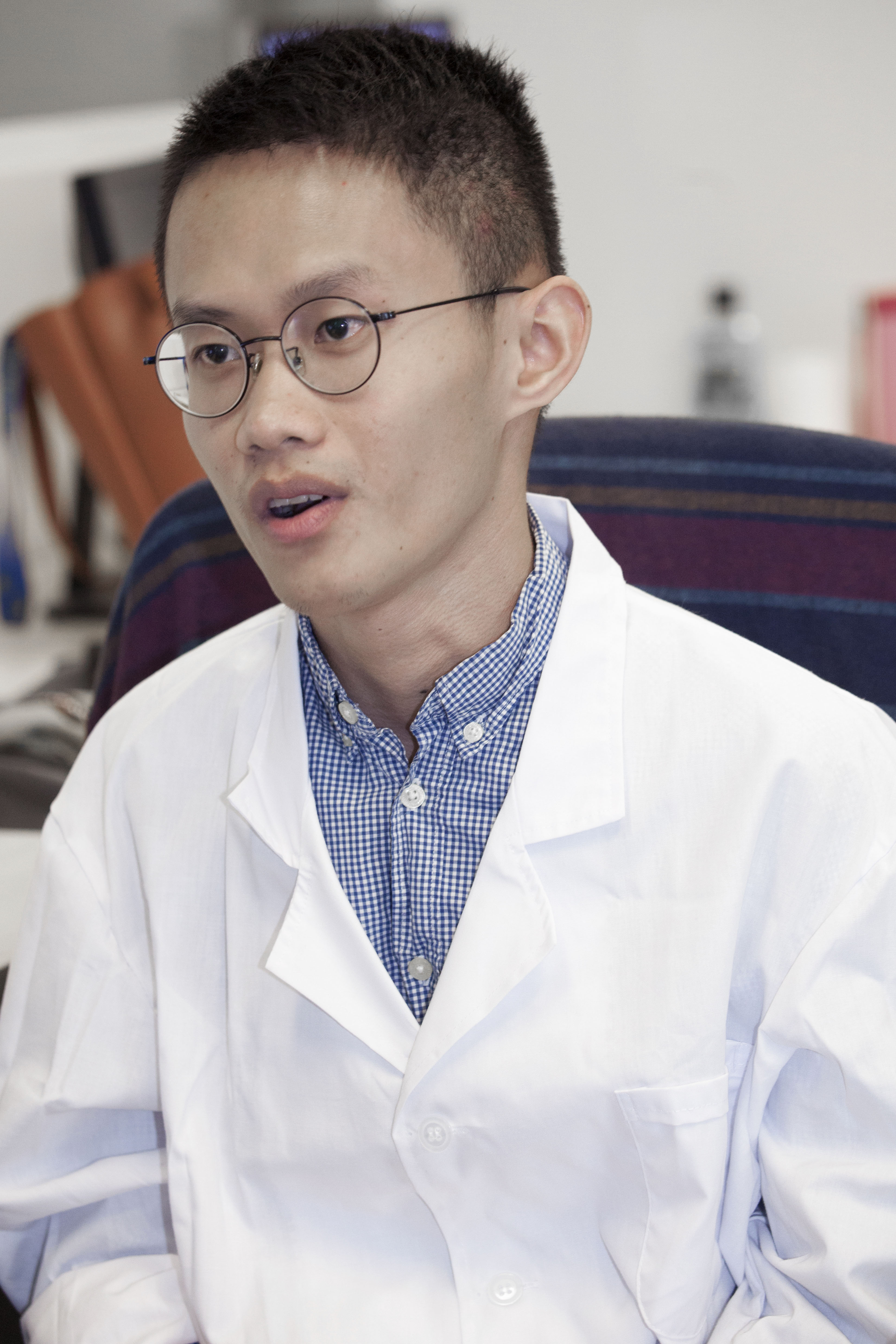 Sun Jingzhang is working on the application of artificial neural networks to reduce noise in medical imaging under the guidance of Prof Mok.