Source: My UM
Taking off his suit jacket and putting on his apron, William Lee Wee Keng, associate master of Cheng Yu Tung College, turns into the college’s master chef when he cooks for his students. His dishes can easily attract food-loving students from the college, who would get together and share the food like a family. Known affectionately as ‘daddy’ among his students, Lee does not cook to satisfy his need to eat. Instead, he enjoys cooking as a hobby and loves the satisfaction he gets from sharing food with others. Lee thinks that home-cooked food can increase students’ sense of belonging and make the university feel like a home.

Lee was born in a Hakka family in Malaysia. His grandfather was a local chef who could cook all kinds of dishes. Under the influence of his grandfather, everyone in Lee’s family became a connoisseur of food and Lee developed a strong interest in cooking. Coming from a family of limited means, Lee’s grandfather would cook stuffed tofu for him as nutritional supplements. When Lee grew older, he started to learn more about Southeast Asian culture and taught himself to cook.

After graduating from the University of Malaysia, Lee went to the United States alone with USD 400 to pursue further studies at the University of Texas at Austin. In order to earn tuition fees and living expenses, he worked in a restaurant in the Chinatown of Atlanta as a waiter and was later promoted to manager. ‘During the years I worked in the restaurant, I learned to cook different kinds of dishes,’ he says. ‘It was not easy to study and work at the same time, but I felt happy to find a job that suited my interest.’

Studying abroad can be a lonely experience. Luckily, Lee cooked his hometown dishes to combat this loneliness. ‘Whenever I missed my family, I would cook a hometown dish. My favourite dish is the stuffed tofu that my grandfather used to cook for me,’ he says. ‘Even today I often make this dish for my students.’ Cooking hometown dishes not only brings back Lee’s childhood memories, but also reminds him of his grandfather.

Although Lee was a poor overseas student, he liked to invite classmates with similar backgrounds to dine together. ‘I usually bought the cheapest ingredients. If you know how to cook, you can make tasty dishes out of the simplest ingredients,’ he says. ‘The gatherings gave me an excuse to bring my friends together. The food was also an encouragement to us during the hard times.’

After joining UM, Lee carried forward his cooking philosophy to his residential college. He is usually very busy with work and only has time to cook during weekends or holidays. Lee likes to invite his students to dine with him in his home. Before the final week of each semester, Lee would prepare late night snacks for the students, and the food would be enough for about 60 people. ‘It is very tiring to cook for so many people, but I also feel very happy,’ he says. ‘During the final week, students usually study late into the night. After finishing the late night snacks, they would return to their bedrooms and continue working for the exams. I think the food can make our college feel like a home.’ In fact, one of the goals of the residential college system is to foster a sense of belonging among the students. Lee loves his students and treats them like his children, and cooking food is his way of expressing his love for them.

Whenever Lee is home, he leaves his door open so his students can walk in at any time to talk to him. His home was full of the smell of bak-kut-teh when our reporter visited him. At the time, Lee, dressed in an apron, was chopping tofu in the kitchen. He told the reporter that his signature dish is stuffed tofu, which was a really humble answer because later that day he served his students and the reporter with seven dishes, namely Korean bean sprout salad, meatballs with radish, braised duck with ginger, sautéed celery with dried tofu slices, braised winged bean with shrimps, bak-kut-teh, and taro and tapioca pearl dessert. The guests were all very impressed that Lee managed to prepare so many dishes in just a little over an hour. Lee smiled and said: ‘Of course I didn’t! The duck and sprout salad were prepared the night before and were kept overnight in the fridge. Leaving them overnight makes them tastier.’

While everyone was enjoying the food, Lee only watched quietly. When asked why he did not eat anything, he says: ‘I feel very happy when I see my students eat and chat like a family. I enjoy cooking more than eating. Besides, I don’t eat much nowadays because I am watching my weight.’

Winning a Girl’s Heart with Cooking

Lee shared his secret of winning the heart of his girlfriend in our interview. According to Lee, he met his girlfriend in the United States and captured her heart with home-cooked congee and dishes. They have been dating ever since. Although his girlfriend is living in Taiwan while he is working here in Macao, they still love each other very much. Lee says they are a good match for each other. ‘She is a picky eater and I am a good cook,’ he says. Do you have a secret crush on someone? Chef Lee might just have given you a recipe for winning that person's heart! 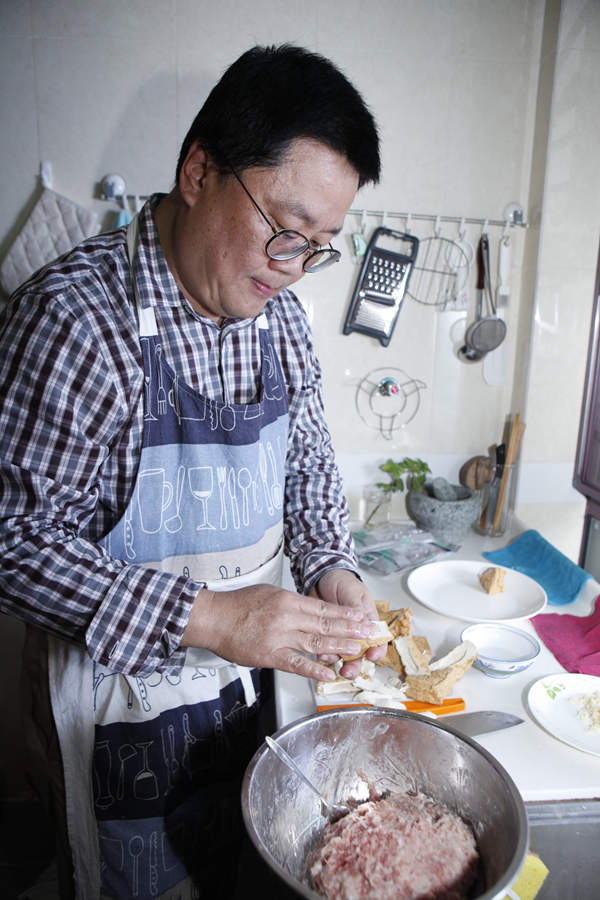 Lee is an expert on Hakka cuisine 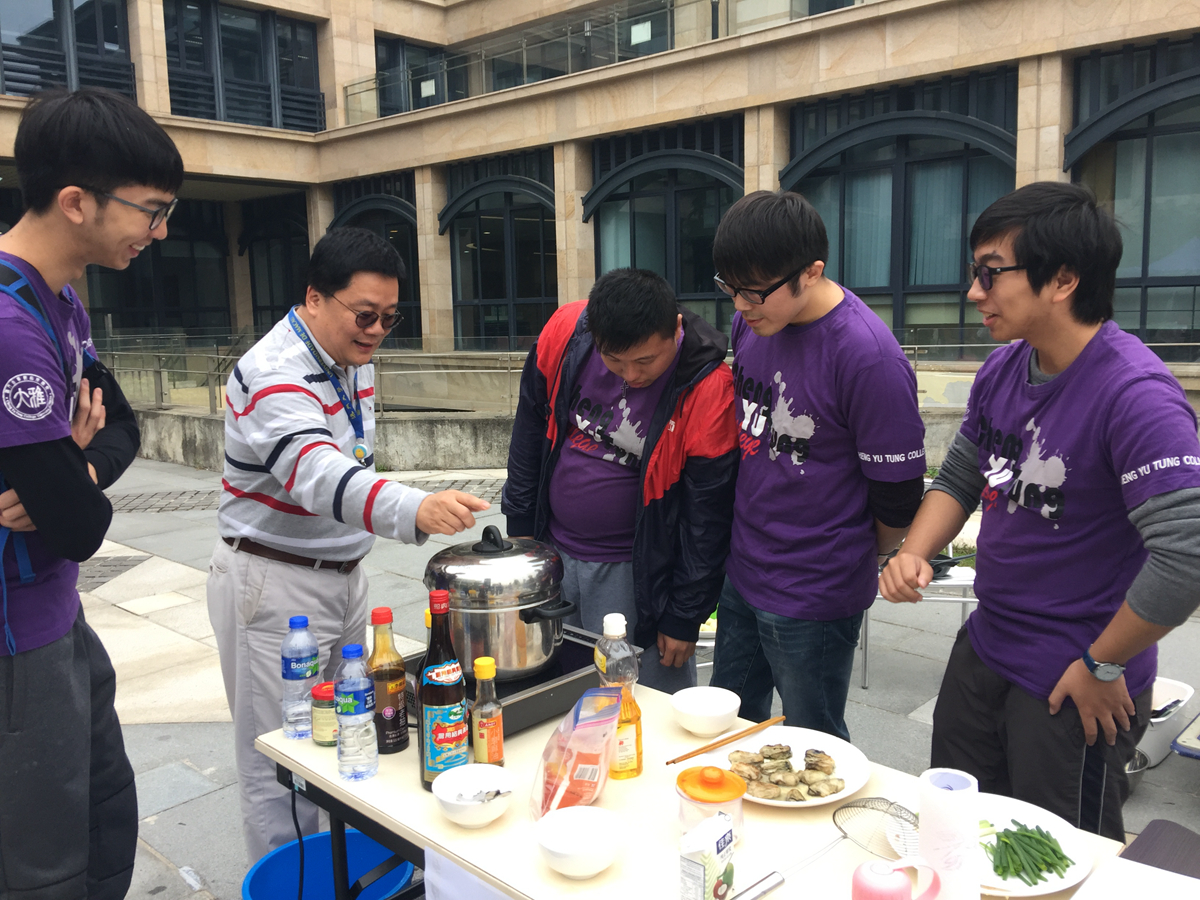 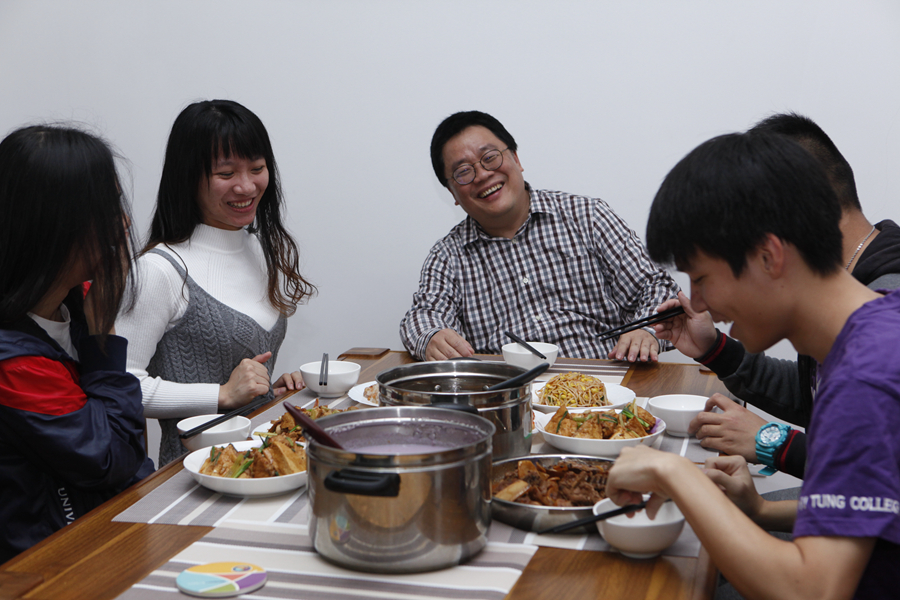 Lee feels happy to see his students enjoying his food 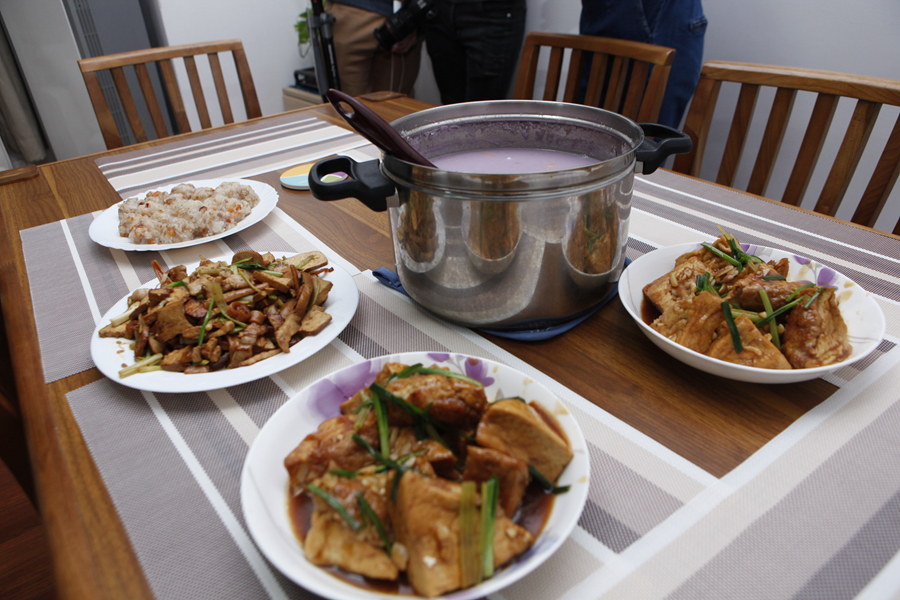