Bruce Lee was a household name in the 1970s. Even today, nearly half a century later, he still remains one of the top martial arts icons. His peerless martial skills, his mettle, and his signature look that exuded a devil-may care kind of confidence, have earned him innumerable fans around the world. Indeed, he has made Chinese martial arts so popular in the western world that the word “kung fu” is now part of the English language. UM Registrar Paul Pang is a huge fan of Bruce Lee’s, but unlike your average fan, Paul doesn’t boast a wealth of collections about this super star except for several books; in fact, what fascinates Paul the most about Bruce Lee is not his onscreen charisma as a martial arts actor, but rather his passion for philosophy.

Paul still remembers vividly how he used to watch as a small boy, spellbound, those fight scenes from Bruce Lee’s films, which were all the rage in the 1970s. “He used to perform on TV how to break boards with his bare hands without relying on the strength of his arms. No one had done it like that before him, and it was very difficult. It was simply amazing,” Paul says, his face lighting up like it always does when he talks about his idol. One of his favourite sayings from Bruce Lee is, “Martial arts means honestly expressing yourself.” It’s not about winning; it’s about knowing oneself and setting oneself free.

This philosophical side of Bruce Lee is precisely what makes Paul so crazy about him. Opening the book Bruce Lee: Artist of Life, Paul says, “Bruce Lee was more than just an actor; he was a martial artist, philosopher, poet, mentor, film producer, director, and screenwriter. There have been a lot of martial artists in China, but few have been as well versed in philosophy as Bruce Lee. He majored in philosophy while studying in the United States. He wrote prose and poetry and compared notes with masters in various fields. During the 12 years he lived in the US, he read 2,500 books, which was four books every week.”

The sofa next to Paul’s office desk is stuffed with books, all of which are plastered with post-it notes. It turns out Paul has the habit of underlining and annotating sentences he likes when reading, so every time he finishes a book, it would be full of notes. Those books about Bruce Lee—he has read them so many times he has learned the gist of every page by heart.

Paul has been telling his nine-year-old daughter bedtime stories since she was three. But unlike most other parents, Paul has a unique way of telling stories. “I have four principles for all the stories I tell my daughter,” Paul explains. “They show the importance of being kind to others and helping those in need; they are my way of honestly expressing myself; they are emotion-laden and have scenes that my daughter can easily relate to; and they teach the value of diversity and being tolerant of others.”

Just like Bruce Lee has created his own martial way, Paul has invented an original way of telling stories which he says was inspired by his idol. “I don’t use ready-made stories,” says Paul. “I always use children’s favourite characters when I make up a story. For example, if I think friendship is about having fun together, I would make up a story about Cat the Chubby and Bear the Fluffy having a party and giving each other presents. If I think friendship is about helping each other in times of need, I would make up a story about Pleasant Goat helping Lazy Sheep. I always weave those values which I genuinely believe in into the stories.”

Who could have imagined that Jeet Kune Do, an eclectic combat system founded by Bruce Lee, which doesn’t have any fixed routine but rather requires the person to improvise based on the moves of his opponent, would one day inspire a father to create a unique story-telling method?

By improvising the plot lines of the stories according to his daughter’s reactions, Paul certainly has found a great way of honestly expressing himself and imparting his values to his child. And as for an interesting takeaway from this unlikely marriage between actions and words—well, perhaps sometimes, with the right method, words can speak just as loud as actions. 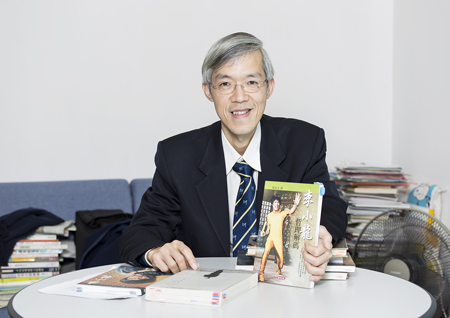