Fai is of Guangdong descent. In the 1970s he immigrated to Macao where he started a family and raised two sons. He joined UM in 1989. From the General Affairs Office to the Campus Management Office to the Security and Transport Section, over the years Fai has witnessed the expansion of the university which he has come to see as his other family. What does Fai think is the most important thing in life? “Be happy. That’s all that matters in life.” says Fai.

Fai was working at a bus company before he got the job as a driver in UM’s General Affairs Office by chance in 1989, thus beginning his long career at the university. Over the past 23 years, he has witnessed the numerous changes of the university—from government acquisition of the University of East Asia and renaming it University of Macau in 1991, to the university’s imminent relocation to its new campus. “Back then, the New Century Hotel was just built. There were only a few students and staff. I was the only driver in the General Affairs Office, so I had to do pretty much everything myself,” recalls Fai. “We had two other drivers, but they mainly took care of the rector. I was responsible for delivering mail and driving university guests. We didn’t have a lot of cars, so I had to drive the university car to deliver documents and pick up mail and stuff.”

Having witnessed UM’s growth all these years, Fai is especially happy for the university’s rapid progress. “The university has improved a lot in many areas, thanks to the great support of the government and the country, and I’m truly happy for it,” says Fai. With expansion comes a heavier workload. But Fai doesn’t seem to mind: “I’m happy doing what I do, so the increased workload doesn’t bother me.” Apart from being the vice rector’s driver and performing daily document delivery, Fai also needs to provide support to other tasks. “Now we have a lot more students, teaching staff and administrative colleagues, and I hope one day UM can become a famous university, but maybe I’m already retired by then,” Fai says smilingly.

Fai the Father: I give them the freedom to choose

Several months after Fai started working at UM, Fai’s wife also joined UM, in the Faculty of Education. Commuting between Macao and Taipa was not very convenient, so they decided to move to Taipa, leaving their two sons, who were still in middle school, to fend for themselves in their old apartment. This decision would later prove to be good for their boys’ growth. “They were forced to take care of themselves,” recalls Fai. “They did everything on their own—homework, cleaning, cooking.” The only family reunion time was during supper—Fai and his wife would rush home after work to eat supper with their sons before rushing back to their apartment in Taipa. Maybe it was because the boys have spent so much time together since a young age that they have always been close to each other.

Fai says he gives his sons the freedom to choose what they want to do with their life. “I seldom interfere, whether with study or work, as long as they like what they do and don’t do anything bad or illegal.” His elder son, being good at study, used to help his little brother with homework. The younger one, a lover of sports, used to practice jogging after class. Is it pure luck to be blessed with children so wonderful that raising them is made a breeze? Well, perhaps not entirely. Perhaps Fai’s laissez-faire approach has played a part too. “Personally, I think keeping children on too tight a leash is only going to backfire,” says Fai.

Fai admits that like every parent in the world, there were times when he asked himself if he was doing the best job he could with his two sons, and he always finds comfort in the knowledge that he has never imposed his own wishes on his children, that he always lets them choose what they want to do with their life. “What’s important is to teach children to tell right from wrong, and to lead an honest and down-to-earth life,” says Fai. “We as parents never tell them they have to achieve this or that. We let life take them where they are meant to be by giving them the freedom to choose and decide, whether they were the young boys they used to be or the grown-ups they are now.”

Fai’s elder son studied at a medical university in Taiwan, and after graduation he returned to Macao to work at a local hospital. Now he is happily married. Fai’s younger son studied in Macao and the United States and now works in the media sector (was it a coincidence that he used to study at UM where his father works? When asked if Fai had any influence in his son’s decision, Fai shook his head, “Absolutely not. It was entirely his own decision.”) Fai jokes that with his two sons graduating from university, he considers himself to have also passed the course of raising them. “Like I said, being happy is all that really matters in life,” says Fai with a toothy grin. “And how can I not be with two sons so good?” 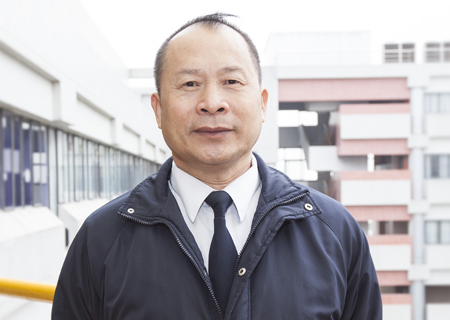 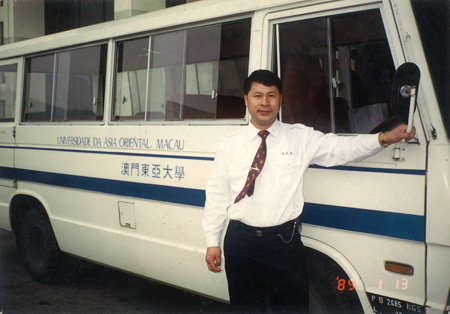 Fai at the University of East Asia (predecessor of UM)