At the sixth International Conference on Contemporary Chinese Grammar, which was held in Kaohsiung, Taiwan, from 3 December to 4 December, 2011, Dong Sicong, a PhD student of the Department of Chinese, Faculty of Social Sciences and Humanities, University of Macau (UM), presented his paper Grammatical Research in “Nanguai(難怪)” Related Expressions in Chongqing Dialect, in his capacity as a fully-sponsored scholar, and received the second prize of Young Scholars Award.

The sixth International Conference on Contemporary Chinese Grammar was hosted by the Chinese Language Center and the Center for General Education, I-Shou University, and hit a new high in terms of the number of participants. This is the first time the conference has been held in Taiwan. Dong Sicong submitted his paper in April and successfully obtained a full sponsorship. Through paper presentation and discussion, Dong Sicong received the second prize of Young Scholars Award. 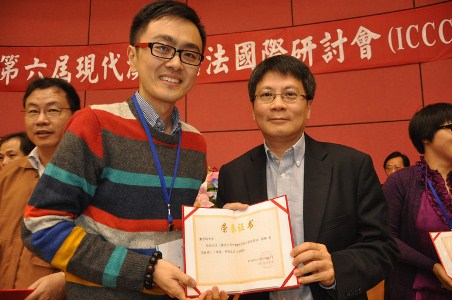