Recently a delegation from the University of Macau (UM) went to Hong Kong to visit the renowned master of sinology Prof. Jao Tsung I to express gratitude for his longstanding support to UM in its academic and research development. Prof. Jao noted that UM possesses enormous potential and the new campus, once put into use, will help advance academic and research development in Macao and make important contributions to the development of culture and arts in China.

The delegation consisted of UM Rector Wei Zhao, founders of the University of East Asia (UEA, the forerunner of UM) Dr. Wong King Keung and Mr. Edward P.H. Woo, UM Registrar Paul Pang, and Head of the Information and Public Relations Office at UM Ms. Katrina Cheong. The delegation was warmly received by Prof. Jao Tsung I, Prof. Jao’s daughter Ms. Angelina Yiu Ching Fun, Senior Researcher at the Jao Tsung-I Petite Ecole, the University of Hong Kong (HKU) Dr. Peter Cheng Wai Ming, Curator of the Jao Tsung-I Petite Ecole Dr. Tang Wai Hung, Executive Assistant at the Jao Tsung-I Petite Ecole Ms. Ko Man Yee, and Prof. Tse Shek Kam of the Faculty of Education at HKU. At the age of 96, Prof. Jao looked hale and hearty and oozed charm unique to an erudite scholar. He served as a chair professor in the School of Arts at UEA, for eight years. He assisted with the establishment of the Department of Chinese Literary History and served as the department head. In 2004 he conferred the titles of Honorary Doctor and Honorary Professor by UM. Prof. Jao has always closely followed UM’s academic and research developments. During the meeting, Prof. Jao highly recognized the impressive achievements UM has attained in recent years. He said: “UM has immeasurable potential. The new campus, once put into use, is sure to further academic and research development in Macao, help nurture more outstanding academic and research professionals, and make important contributions to the development of culture and arts in China. ”

UM Rector Wei Zhao told Prof. Jao about UM’s academic development in recent years as well as the master plan of the new campus. “Masters and buildings are crucial to the development of a university. In the early years the three far-sighted founders of UEA invited the unparalleled contemporary master of sinology Prof. Jao Tsung I to take the helm of the School of Arts, which has had a far-reaching impact in laying a solid academic and research foundation and in nurturing for Macao a group of experts well-versed in sinology,” remarked Rector Wei Zhao. “Prof. Jao initiated the study of the history of Macao at UEA, laying a solid foundation for Macaology, a burgeoning field of study in recent years. The good results UM has achieved today in the field of humanities would not have been possible without the hard work of intellectual titans like Prof. Jao who diligently tilled the soil and planted the seeds.”

Prof. Jao has always loved and cared about UM, which is evident not only from his words, but also from an inscription he wrote for UM, in which he expressed his hope that UM can serve as a “new model in the field of humanities”. Last April, he wrote another inscription “Macaology” for UM, for which UM Rector Wei Zhao expressed deep gratitude. UM Rector Wei Zhao also promised to encourage UM staff and students to inherit Prof. Jao’s meticulous devotion to academic studies and advance societal development through academic research.

An intellectual heavyweight, Prof. Jao has written books on a wide range of topics including Oracle bone script, Dunhuang, ancient characters, ancient history, history of the ancient Near East, history of arts, music, and morphology. He is also of great erudition in painting and calligraphy. During the meeting Prof. Jao gave four series of works of calligraphy and painting as well as the first and second volumes of the Illustrated Catalogue of Collections of Jao Tsung-I Petite Ecole to UM. Both parties held discussions on higher education, culture and history in a cordial and lively atmosphere. 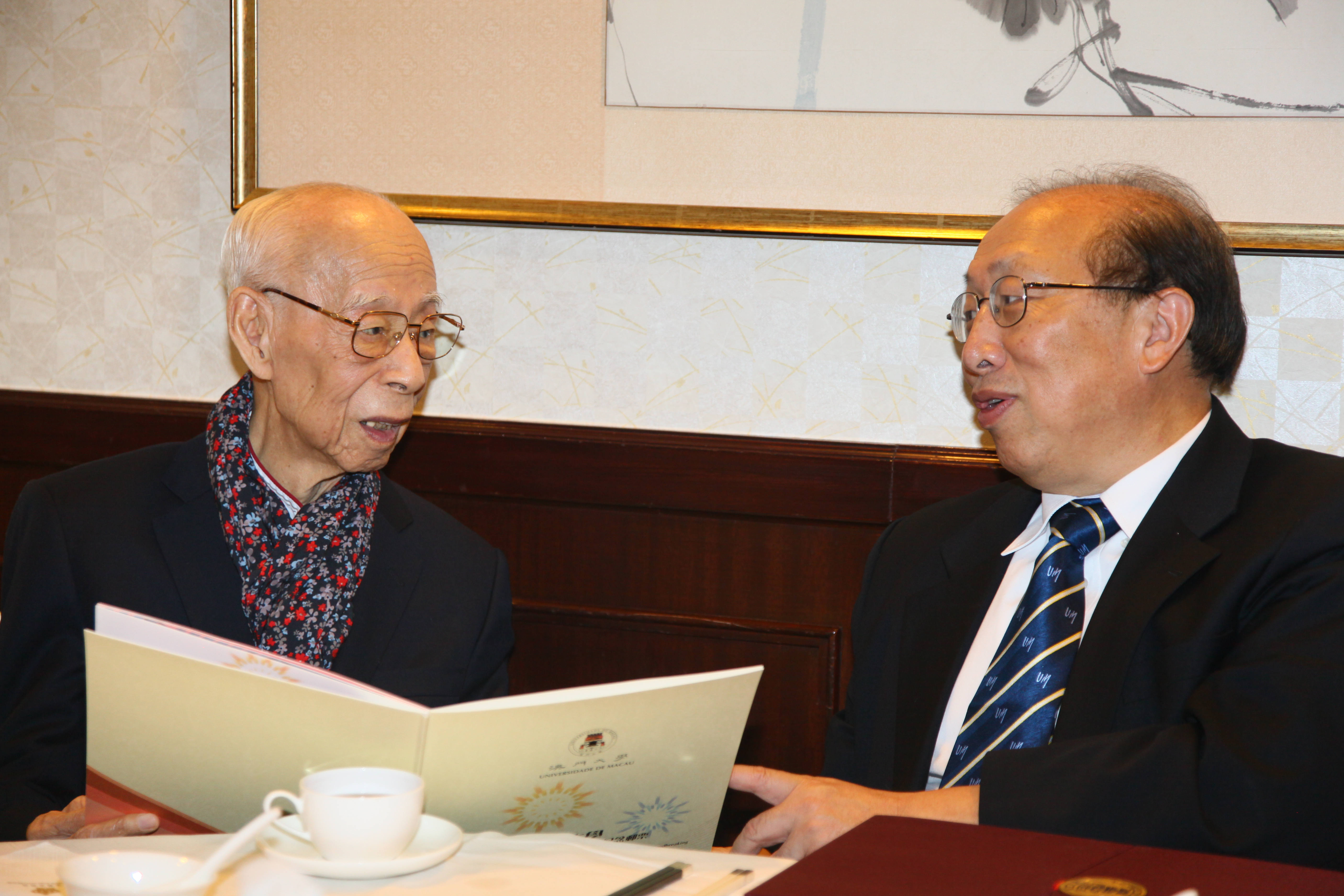 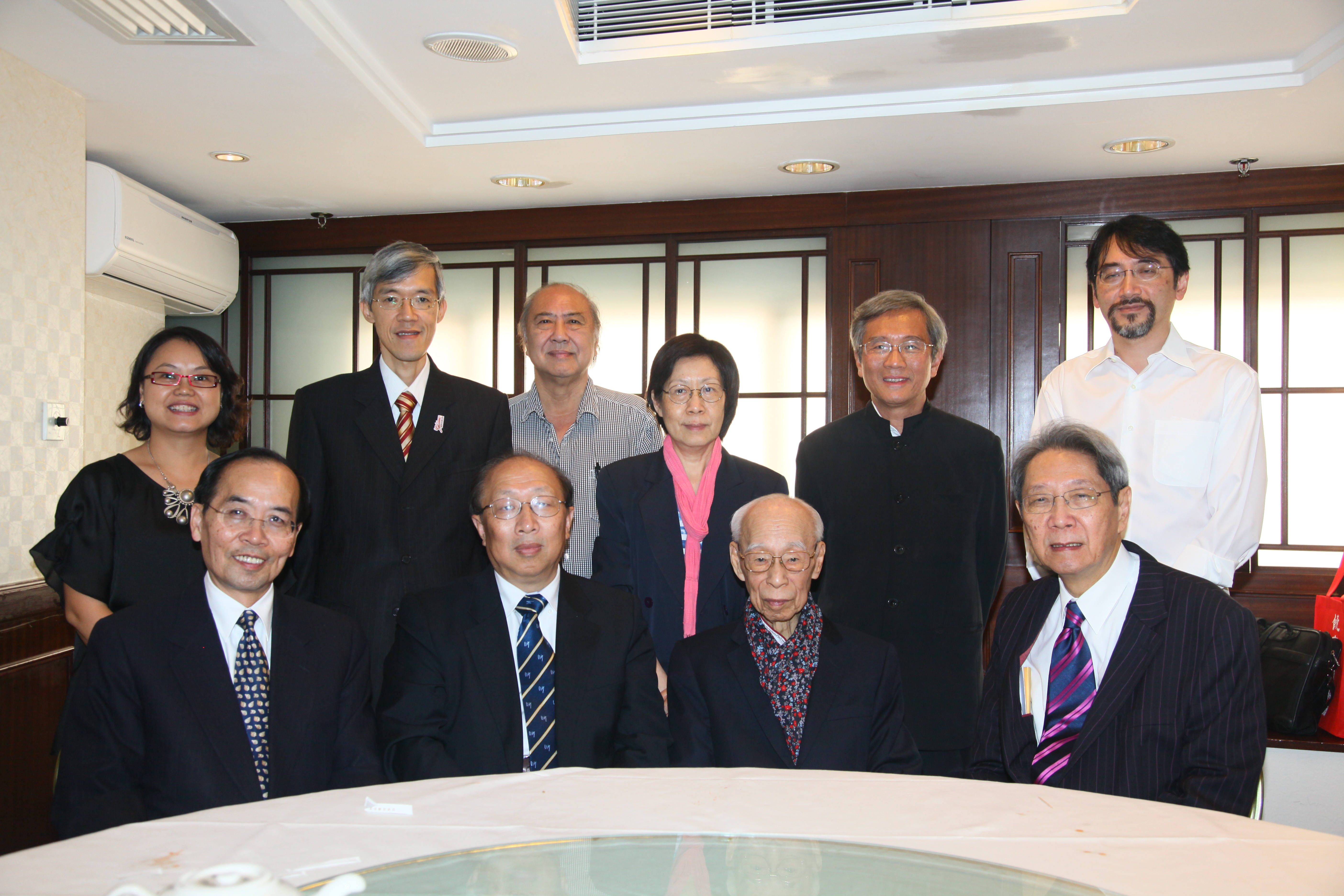 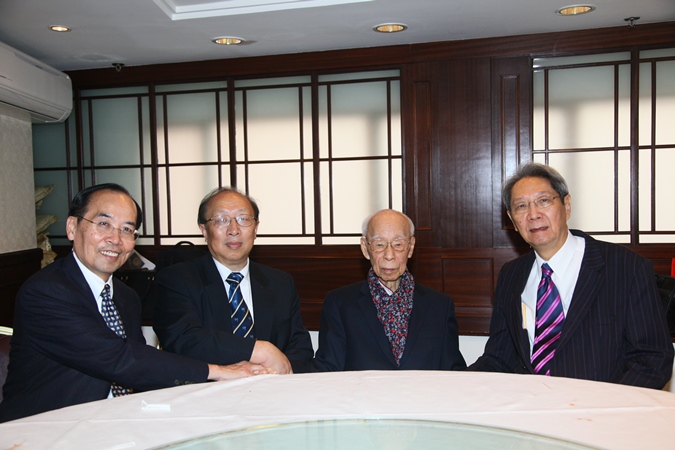 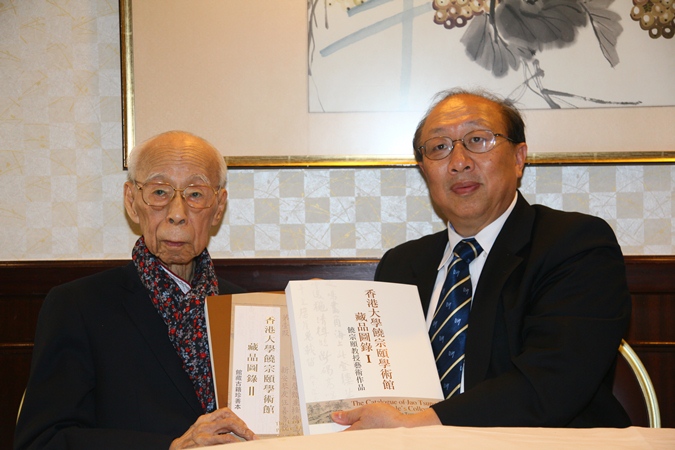