20 Dec 2009 is a highly significant day because it witnesses three important events, namely the 10th anniversary of Macao SAR, the inauguration of the third Chief Executive of Macao SAR Dr. Chui Sai On, and the landmark groundbreaking ceremony for the new campus of the University of Macau (UM). The new UM campus has an epoch-making significance because it represents an important milestone in the development of Macao’s higher education. A delegation from the Central Government led by Mr. Hu Jintao, General Secretary of the Central Committee of the Communist Party of China (CPC), President of the People’s Republic of China, and Chairman of the Central Military Committee, attended the groundbreaking ceremony, with President Hu officiating at the ceremony, showing the Central Government’s great support for Macao’s higher education and the new UM campus.

Upon arrival at the new campus site, President Hu inspected the architectural sand table model based on the master plan for the new campus. UM Rector Wei Zhao updated President Hu on the planning and design principles for the new campus and thanked the Central Government on behalf of all teachers, students and staff of the University for granting this unprecedented, golden opportunity to the University. He committed to developing UM into a leading university in Asia and a first-rate university in the world within a relatively short time frame through the introduction of various measures into the new campus such as implementing elite undergraduate education, developing an outstanding faculty team, and promoting research excellence.

Afterwards President Hu met with officials of Guangdong and Zhuhai governments as well as UM’s top management. At the meeting President Hu summarized his high expectations for the University with five “first-rates”: becoming a first-rate university in the world, building the first-rate facilities, developing a first-rate faculty team, nurturing first-rate graduates, and achieving first-rate results. He also wrote an inscription for UM that reads: “love China, love Macao, learn extensively, and practice earnestly”.

The groundbreaking ceremony began at 4:00 p.m. President Hu Jintao, accompanied by Dr. Chui Sai On, officiated at the plaque unveiling ceremony. Dr. Chui Sai On notes in his speech that UM is the first university ever established in Macao, and through nearly three decades’ development, the University has laid a relatively solid foundation. He says that the new campus, once completed, will usher in a new era for the University. He also expresses confidence that UM’s teachers, students and staff will work together towards a shared goal of developing UM into a world-class university with unique characteristics.

State Councilor Liu Yandong says in her speech that the approval of the construction of the new UM campus on Hengqin Island is an important initiative on the part of the Central Government that aims to support the Macao SAR’s endeavor to develop education and nurture outstanding graduates. She says UM is the most influential comprehensive university in Macao and thus enjoys an important status in nurturing outstanding graduates for Macao SAR. She adds that the new campus, once completed, will offer a much larger space for UM to realize further development and will help improve the learning and living environment of teachers and students alike, thus enhancing the overall teaching quality of Macao SAR and promoting the nurturing of high-caliber graduates. She says she has full confidence that UM will seize this opportunity to achieve new milestones and make greater contribution to the moderate industrial diversification of Macao.

As part of the groundbreaking ceremony, President Hu Jintao, State Councilor Liu Yandong, Secretary of the Guangdong Provincial Committee of CPC Wang Yang, Director of the Hong Kong and Macao Affairs Office of the State Council Liao Hui, Chief Executive of Macao SAR Chui Sai On, and Chair of the University Council of UM Tse Chi-Wai used shovels to symbolically “turn the earth” to mark the beginning of the construction process. With the turning of the construction machinery, UM formally kicked off the construction of its new campus which is expected to be completed within three years. 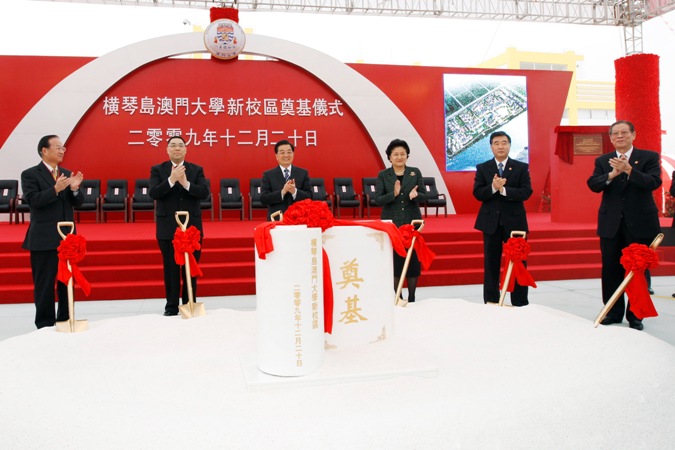 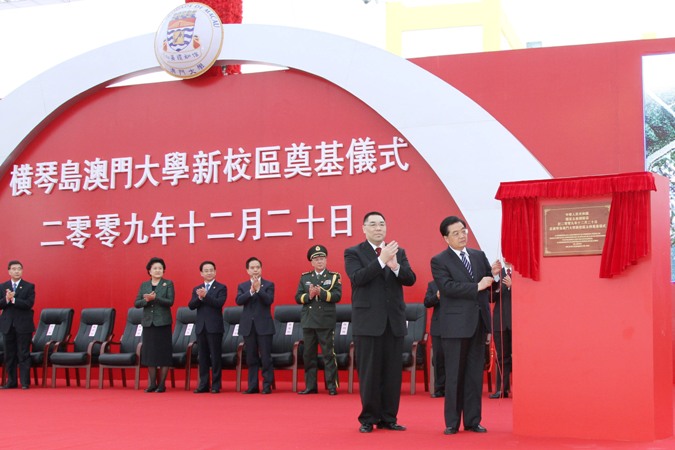 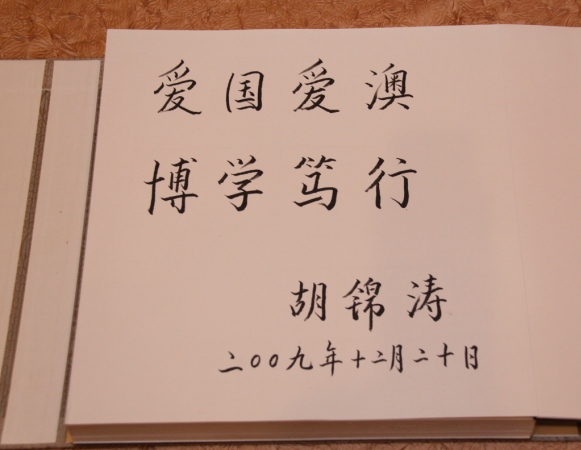 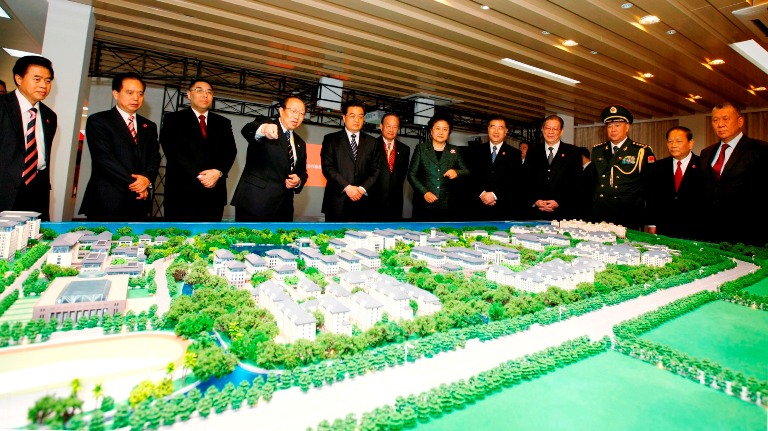