UM Teachers and Students Celebrate the Groundbreaking for the New Campus

The groundbreaking ceremony for the new campus of the University of Macau (UM) ended with great success on 20 December. President Hu Jintao officiated at the plaque unveiling ceremony and wrote an inscription for UM that read “love China, love Macao, learn extensively, and practice earnestly.” President Hu says he hopes UM can follow the principle of “rigorous scholarship” and meet his high expectations which he summarized with five “first-rates”. UM teachers and students thanked President Hu for deeply caring about the University and pledged to work together to develop UM into a world-class university.

At the groundbreaking ceremony President Hu summarized his high expectations for the University with five “first-rates”: becoming a first-rate university in the world with first-rate facilities, a first-rate faculty team, first-rate graduates, and first-rate achievements. He also wrote an inscription that read “love China, love Macao, learn extensively, and practice earnestly” to encourage UM to work relentlessly to attain the ambitious goal of becoming a world-class university. The inscription also conveyed his hope for the students to set ambitious individual goals, pursue constant improvement, and learn extensively to broaden their horizons in order to better serve Macao and China after graduation.

UM Rector Wei Zhao says that the success of the groundbreaking ceremony would not have been possible without the great support from the Central Government, the governments of Guangdong, Zhuhai and Macao SAR, as well as the Macao community. He stresses that UM’s teachers, students, staff and alumni feel immensely honored to have President Hu officiating at the plaque unveiling ceremony for the new campus and writing an inscription for UM. Rector Wei Zhao further promises that UM will not fail President Hu’s high hopes for the University and will unite all teachers, students and staff to ensure smooth progress of the construction of the new campus in accordance with the plan and instructions of the Macao SAR Government, and once the campus is completed, will work hard towards the ambitious goal of becoming a world-class university and nurturing more outstanding graduates for Macao and China.

On the day of the groundbreaking ceremony which coincided with the 10th anniversary of Macao SAR, a series of celebratory activities was held inside the UM campus, with colorful flags waving welcome at guests. The entire campus was imbued with a contagious festive atmosphere, which reached a climax with an evening party. The beautiful music sound and the rumbling of drums echoed throughout the campus. The students’ wonderful singing and dancing performances repeatedly sent the audience bursting into thunderous applauses.

Chair of the University Council of UM Dr. Tse Chi Wai, UM Rector Wei Zhao, Peking University President Prof. Zhou Qifeng, Peking University Vice President Ms. Yue Sulan, UM Vice Rector Prof. Martins, and UM Vice Rector Dr. Alex Lai, officiated at the party. Dr. Tse and Rector Wei Zhao shared with UM teachers, students and staff the inscription written by President Hu for UM that read: “love China, love Macao, learn extensively, and practice earnestly”. Video footages and pictures about the groundbreaking ceremony were also shown at the party. Teachers and students were filled with an enormous sense of pride, excitement and joy when they were transported back to the site of the landmark event. Students also felt greatly inspired by President Hu’s inscription, saying that they will promote patriotism, cherish the golden opportunity to equip themselves with knowledge so that they can contribute to a brighter future for Macao and China.

A delegation from Peking University led by its President Prof. Zhou Qifeng and Vice President Ms. Yue Sulan also attended the party to celebrate the joyous occasion with UM teachers and students. Besides celebratory purposes, the party also helped to deepen the understanding between the two universities and thus laid a solid foundation for future cooperation. In his speech Prof. Zhou Qifeng congratulated UM on the successful completion of the groundbreaking ceremony for the new campus and expressed his hope that Peking University and UM can step up cooperation in the future to fulfill President Hu’s expectation of building world-class universities. UM Rector Wei Zhao thanked the Peking University delegation for attending the groundbreaking ceremony and the evening party, adding that the party brought together students of the two universities to co-celebrate the landmark day that ushered in a glorious, brand-new page in the history of Macao’s higher education.

At the party the UM Choir cooperated with the Peking University delegation in the delightful rendition of two songs, namely The Song of Seven Sons and My Motherland. The mellow music reverberated throughout the campus, conveying the students’ pride in and joy over Macao’s return to the motherland and an increasingly powerful, prosperous China. Toward the end of the party commemorative stamp sets for the groundbreaking for the new UM campus were distributed to all attendees. 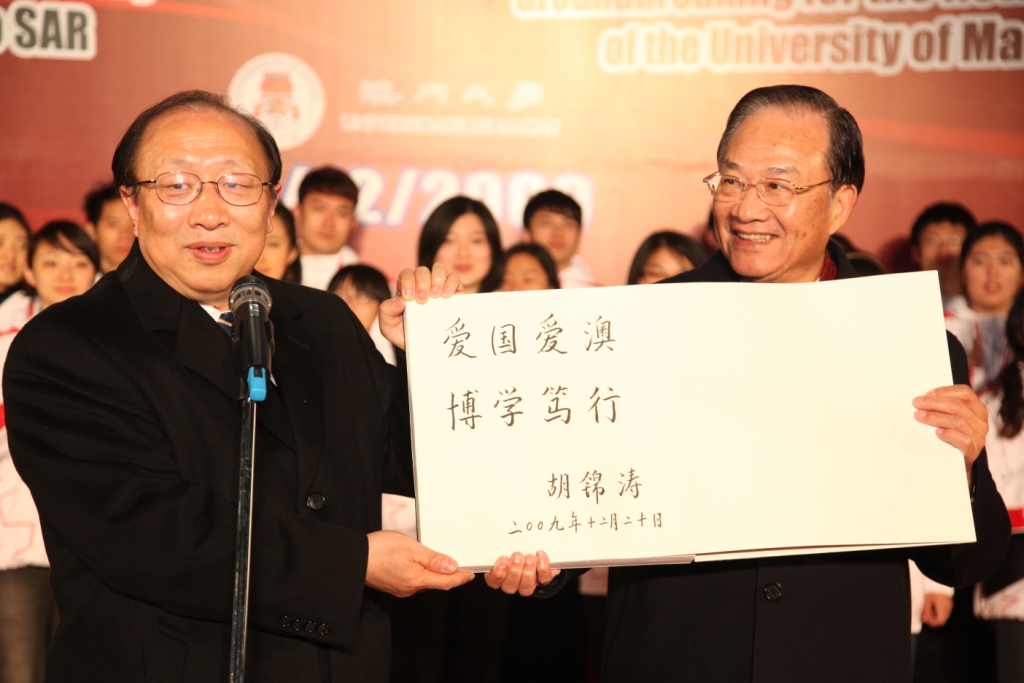 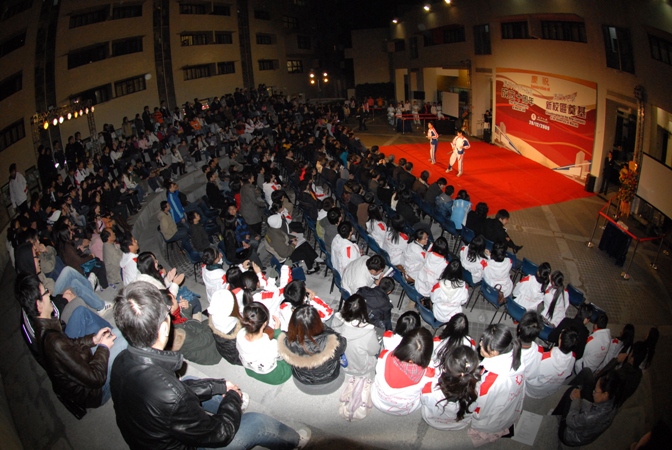 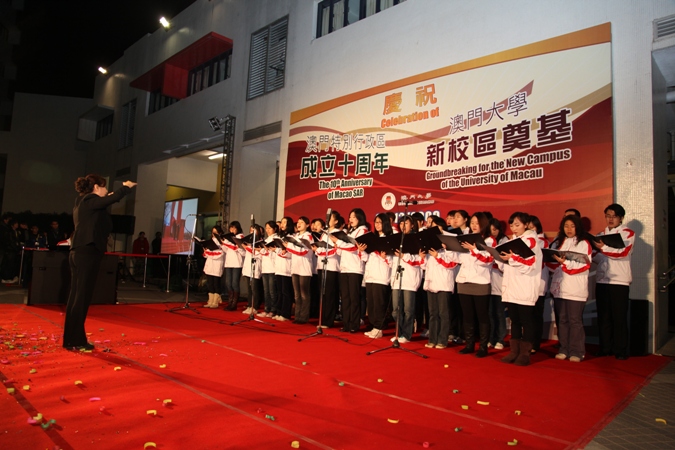 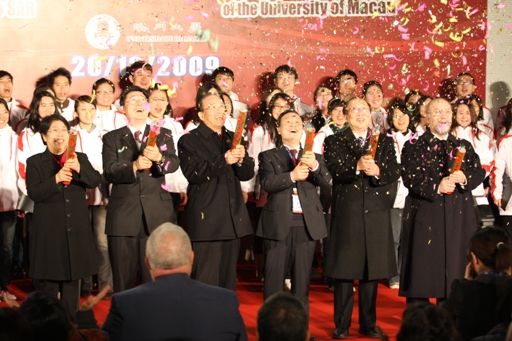 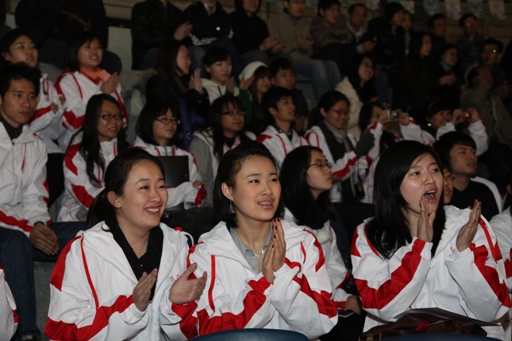 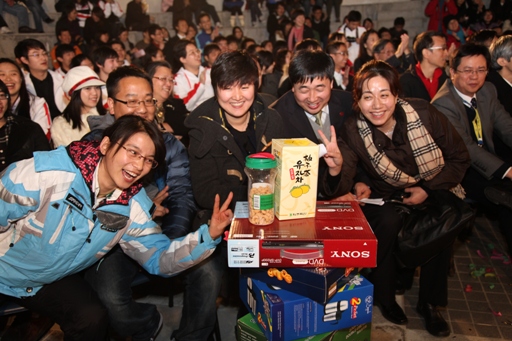 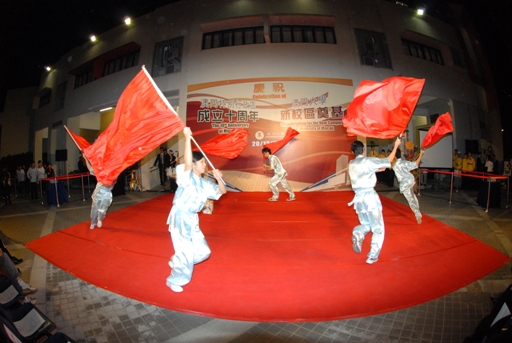