The University of Macau (UM) held a launch ceremony for Macao’s first Autonomous Driving Bus Testing Platform today (23 October), marking that the first autonomous bus has become operational in Macao. The autonomous bus will run on the UM campus on a trial basis. During this period, data will be collected for analysis in preparation for future testing on public roads in Macao.

UM Rector Yonghua Song said at the ceremony that intelligent transport represents the future of the automotive industry, and countries around the world are in a race to develop automotive technology. This testing platform is an efficient transport system based on multiple technologies and mainly aims to tackle the issue of how to use driverless buses as a mode of public transport in congestion-prone areas in Macao. UM will industrialise innovative technologies from the project in order to promote smart city development in Macao and the Greater Bay Area.

According to Chan Wan Hei, president of the Administrative Committee of Macao Science and Technology Development Fund (FDCT), UM has a solid foundation and world-class researchers in the field of smart cities and the internet of things. The establishment of the State Key Laboratory of Internet of Things for Smart City promotes talent training and research in related fields as well as the implementation of urban innovation. The autonomous driving project will help UM improve its research capacity in cutting-edge disciplines and promote the transformation of research results into economic benefits as well as industry-academic collaboration. He expressed hope that in addition to autonomous vehicle research, UM would also carry out research in transport planning and real-time traffic management using urban big data, so as to accelerate the process of developing Macao into a smart city.

The project was headed by Prof Xu Chenzhong, dean of the FST, interim director of the Institute of Collaborative Innovation, and chair professor in the Department of Computer and Information Science and State Key Laboratory of Internet of Things for Smart City. According to Prof Xu, since the launch of the project, 31 related papers have been published, 15 in journals and 16 at international conferences. Two of these papers have been accepted by top international conferences in the field of artificial intelligence. The outstanding results are thanks to the cooperation of various partners. He looks forward to deepening the collaboration with UM’s partners in autonomous driving research. The following individuals also delivered speeches at the ceremony: Liu Fan, executive deputy dean of Baidu ABC Institute, Beijing Baidu Network Technology Co, Ltd; Li Huiyun, deputy director of the Institute of Integrated Technology and director of the Automotive Electronics Research Centre, under the Shenzhen Institutes of Advanced Technology, Chinese Academy of Sciences (CAS); Mu Yi, board director and executive vice president of Haylion Technologies; and Declan Leong, vice president (network services) of CTM.

The project uses artificial intelligence, big data processing, internet of things technology, cloud computing, and other technologies to collect data (such as traffic signals and data about pedestrians and vehicles on the road), to ensure that the bus runs safely and reliably in an open and uncertain environment. The bus is 6.6 metres long and can carry up to eight passengers. There are two modes, the manual mode and the autonomous mode, to suit different needs. In the autonomous mode, the bus can detect static and dynamic obstacles as well as traffic signs, such as vehicles, pedestrians, zebra crossings, and traffic lights, and it can slow down or stop according to actual conditions. The autonomous bus can also change lanes and stop at bus stops. Its maximum speed is 40km/h, which meets safety requirements for public buses. UM will open the autonomous bus for free trial ride subject to prior online registration.

The project is the key R&D project funded by the Macao Science and Technology Development Fund under its Key R&D Programme (file number: 0015/2019/AKP). It was jointly conducted by UM’s Faculty of Science and Technology and State Key Laboratory of Internet of Things for Smart City, as well as several leading research institutions in the field in mainland China, including the Shenzhen Institutes of Advanced Technology under the CAS, Baidu, and Haylion Technology. CTM also played an active part in the project, providing UM with high-quality and stable mobile network technology.

Other individuals who attended the ceremony include Li Yan, policy section chief under the Economic Affairs Department of the Liaison Office of the Central People's Government in the Macao SAR; Che Weng Keong, interim director of the Higher Education Bureau; Chan Hon Sang, deputy director of the Economic Bureau of Macao; Ip Chong Wa, member of the Administrative Committee of the CTT; Ge Wei, vice rector of UM; Lo Ka Meng,interim head of the Vehicle and Driver-Related Affairs Department of the Transport Bureau; Poon Fuk Hei, chief executive officer of CTM; and Yang Zhixin, director of the Research Services and Knowledge Transfer Office at UM. 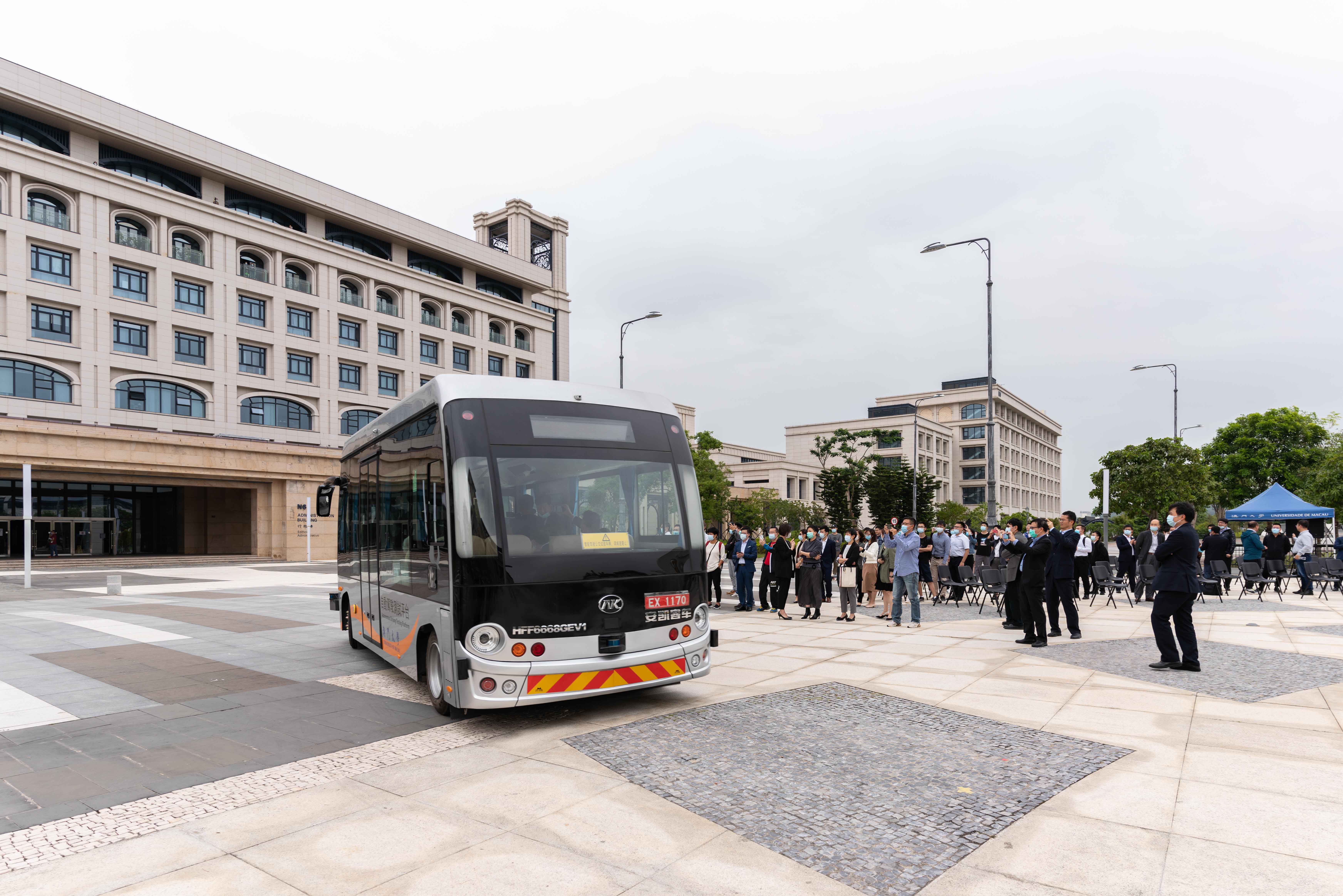 The bus runs on the UM campus on a trial basis 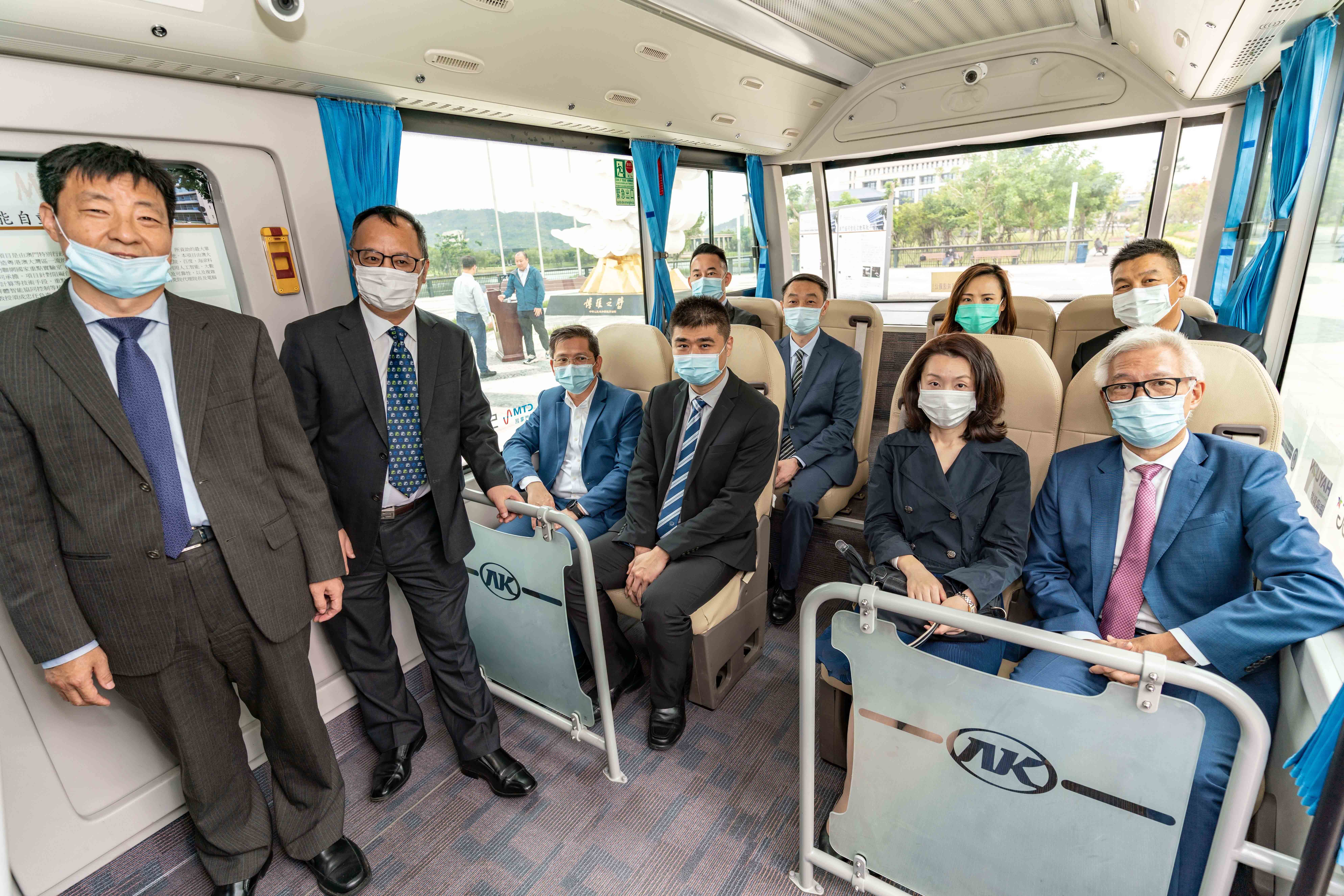 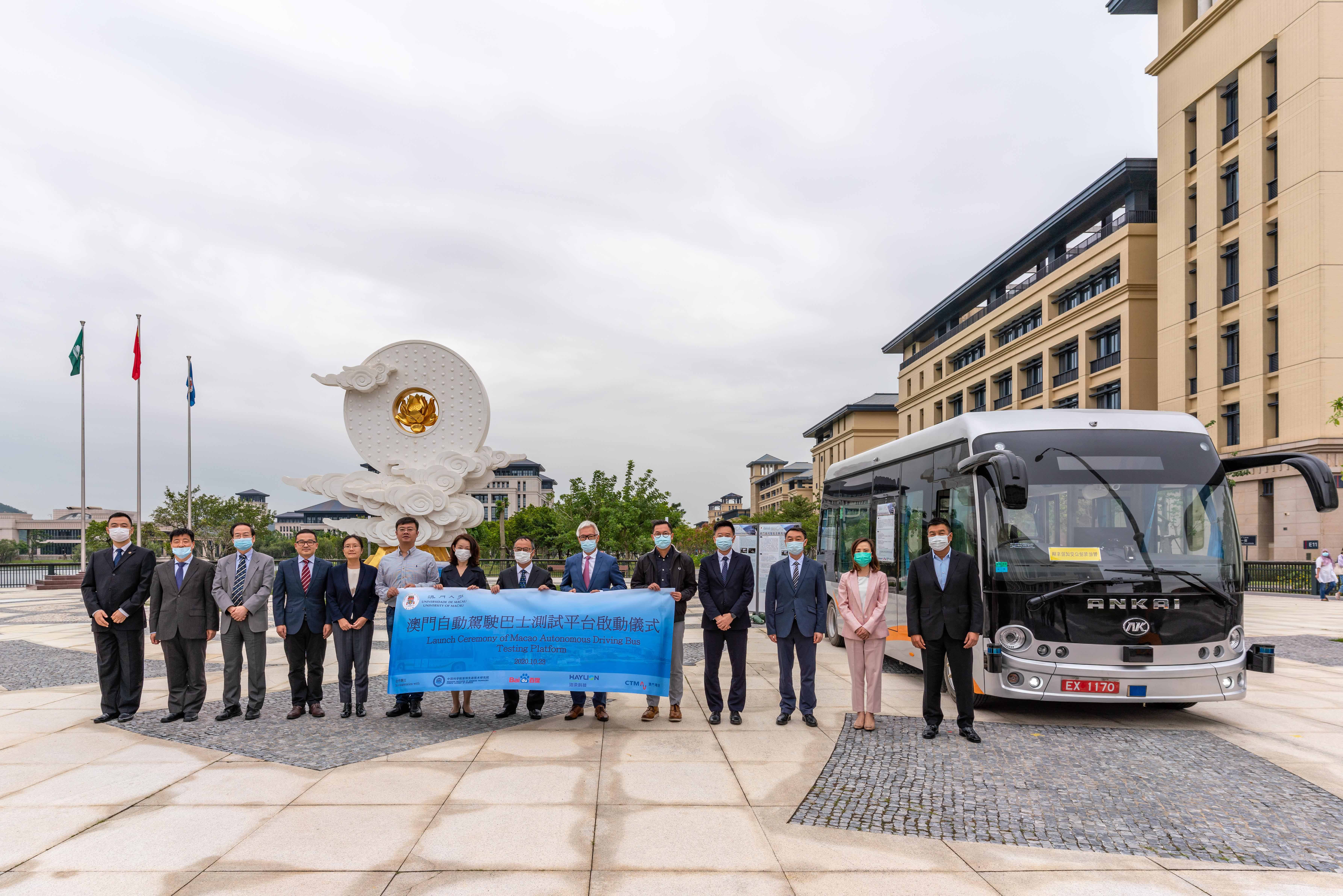