The University of Macau (UM) today (9 November) held the Ceremony for the Conferment of Honorary and Higher Degrees 2019. During the ceremony, the university conferred honorary doctorates on Mr Qiao Xiaoyang, Ms Lau Sin Peng, Prof Dennis Lo Yuk Ming, and Dr Roy Chung Chi Ping, in recognition of their outstanding achievements and significant contributions to social development and education.

Tong Io Cheng, dean of UM’s Faculty of Law, delivered a citation for Mr Qiao Xiaoyang. Part of the citation read: ‘Since the 1980s, the concept of “One Country, Two Systems”has been put into practice and advanced systematically. Mr Qiao Xiaoyang emerged as one of the legendary figures during this period. As a contributor to China’s legal system since the reform and opening-up, Mr Qiao has an encyclopaedic and intimate knowledge of politics, economics, and society in China. With a broad perspective, he probed deep into the realities of Hong Kong and Macao and keenly studied the political environments prevailing in these two territories. With regard to the constitutional issues in Hong Kong and Macao since their return, he has always engaged in sincere conversations with people from all walks of life with a view to forging a consensus through rational discussions. As an open-minded and down-to-earth person with leadership and tact, he has shown both strength and finesse in handling problems. His professionalism and personal charisma have earned the respect of the mainstream of Hong Kong and Macao society.’

Wang Chuang, dean of UM’s Faculty of Education, delivered a citation for Ms Lau Sin Peng. Part of the citation read: ‘Ms Lau’s career in education has spanned nearly five decades. She has visited various places in China and other countries, joining conferences on education and publishing papers in national journals. Meanwhile, she has also been writing extensively for major newspapers, government-affiliated, and private publications in Macao. In the 1980s, the education system of Macao was undergoing a major reform. The government, the education sector, and local education associations were working together for the development of education in the territory. On behalf of the Chinese Educators Association of Macau, Ms Lau made many suggestions both in support of and in amendment to the proposals on education put forward by the government. It may be said that she spared no effort in her contribution to education. She also attached great importance to students’ education, teachers’ rights, and the development of private schools. Her insightful inputs on many related topics were invaluable to the sector. One of her works, A History of Education in Macao, was published in 1999 and has veritably laid the foundation for the study of the history of education in the territory.’

Chuxia Deng, dean of UM’s Faculty of Health Sciences, delivered a citation for Prof Dennis Lo Yuk Ming. Part of the citation read: ‘During his medical training at the University of Oxford, Prof Lo paid attention to the fact that amniocentesis was a rather risky conventional method of prenatal diagnosis. This was because the method came with a 0.5 per cent rate of miscarriage. In his search for an alternative, he began studying the feasibility of non-invasive prenatal testing. He discovered a natural basic parameter for prenatal testing, and successfully transferred his findings from DNA analysis to clinical application. In other words, he applied the research of non-invasive prenatal diagnosis to a clinical setting, thereby making a significant breakthrough in medicine. Both the discovery and the non-invasive method for prenatal diagnosis were swiftly and widely adopted in over 90 countries, benefiting tens of millions of expecting mothers. In 2017, Prof Lo was once again ranked as the top 20 translational researchers by Nature Biotechnology, a prestigious international scientific journal, and was among the top five on the list.’

Jean Chen, dean of UM’s Faculty of Business Administration, delivered a citation for Dr Roy Chung Chi Ping. Part of the citation read: ‘Dr Chung has created a legendary reputation in the Hong Kong industry with his unremitting efforts, and has been named by Hong Kong media as the “King of Power Tools.” As a leader in the industry, Dr Chung actively promotes the industrial development of Hong Kong. He often tirelessly leads the industry to explore business opportunities in the mainland and around the world, so that industrialists can better understand the domestic and overseas markets, as well as the development of new technologies in respective fields. He is committed to giving back to the community, and notably nurturing the youth, As society is now moving towards a knowledge-based economy, Dr Chung believes that vocational education is crucial to the future development of Hong Kong. He is currently the chairman of the Hong Kong Vocational Training Council, and has been appointed by the Hong Kong SAR government to chair the Task Force on Promotion of Vocational and Professional Education and Training to nurture talents for different industries in Hong Kong.’

Ms Lau delivered a speech to express thanks to UM for the honorary degrees on behalf of all the awardees. She said: ‘My insights come from three sources: apart from teaching and training imparted to me by school teachers, there are innumerable “silent teachers” that were the books, papers, newspapers, and periodicals that I was able to access. Moreover, there are countless “voices” that acted as teachers, which came from the discussions and debates at various conferences and seminars.’She added: ‘The four of us have two things in common. First, we all have been engaged in teaching and enjoy cultivating the next generation. Second, we spared no efforts in contributing to society and took it as our life-long endeavour.’

Mr Qiao also delivered a speech, in which he shared his special ties with UM. He said: ‘From site selection, laying the foundation stone, construction, to the formal inauguration of the new campus, it can be said that I was involved in every stage of the process. This morning I told the students: “You no longer need to address me as a guest when introducing me, as I am not a guest anymore. I also told the students that I feel pleased to be a UM member and that seeing the campus so lively and vibrant, I myself feel younger as well.’His speech was greeted with thunderous applause. 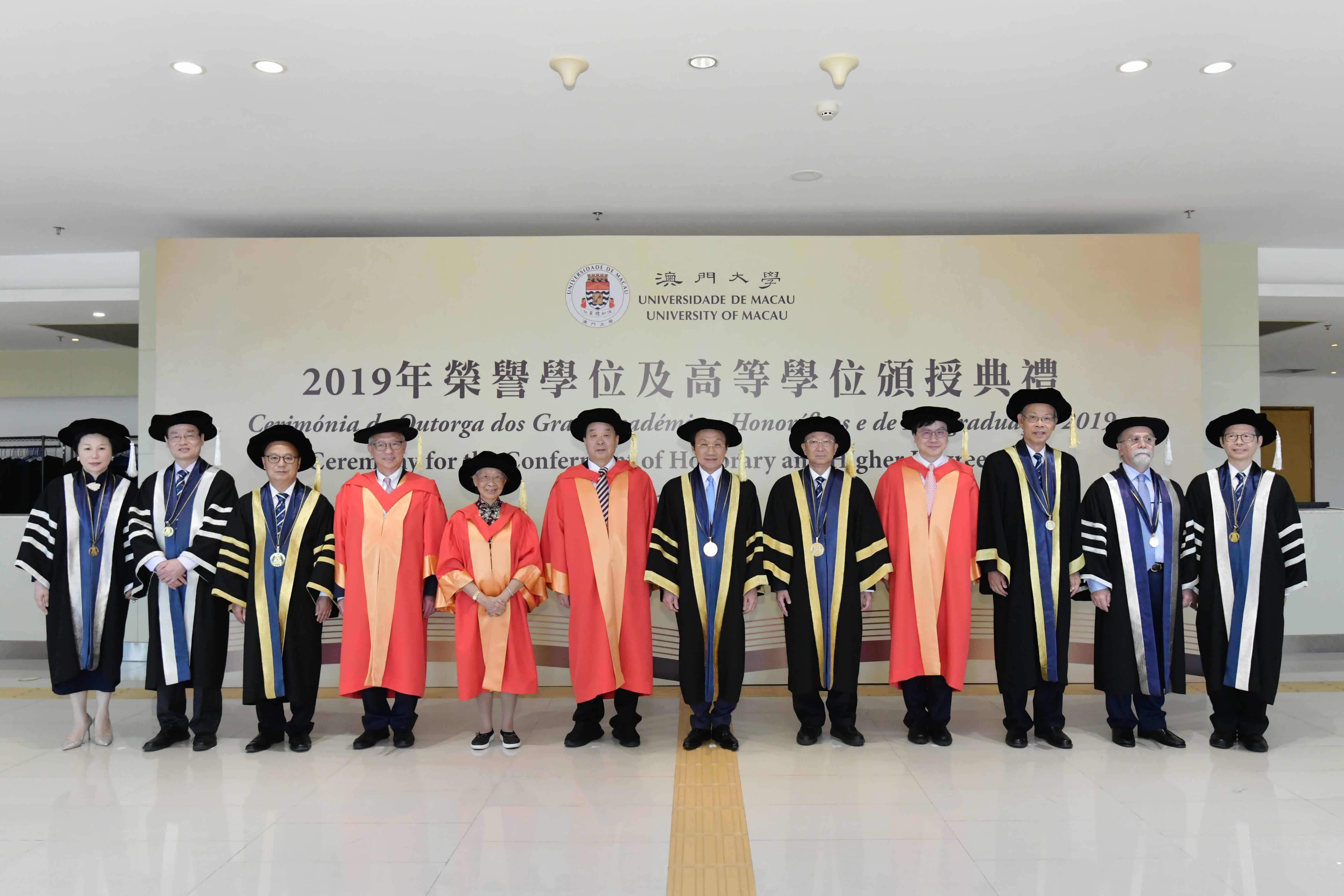