A team from the University of Macau (UM) State Key Laboratory of Analog and Mixed-Signal VLSI and Institute of Microelectronics presented their research findings at the 66th International Solid-State Circuits Conference (ISSCC) of the Institute of Electrical and Electronics Engineers (IEEE) held from 17 February to 21 February in San Francisco, the United States. Eight papers from UM were accepted at this year’s conference, ranking the university second in the world in microelectronics research, along with Mediatek and the University of Michigan - Ann Arbor, next only to Intel. This shows international recognition of UM and its leading position in the field in Asia.

A total of 197 papers were accepted at this year’s conference, accounting for 32.3 per cent of the total number of papers submitted to the conference (609). 16 of the accepted papers are from the Greater China region, including eight from UM, one from the Hong Kong University of Science and Technology, three from Fudan University, two from Tsinghua University, one from Shanghai Jiao Tong University, and one from Southeast University. The papers deal with several broad subjects, namely data conversion, wireless communications, RF circuits, neuromorphic, clocking and security circuits, adaptive circuits and digital regulators, and other analogue circuits for wireless power and energy harvesting. All of these subjects, along with the theme of this year’s conference ‘Envisioning the Future’, are important topics in the emerging research areas of the Internet of Things and Artificial Intelligence.. The eight papers from UM are focused on data converters, radio frequency, and power management. Members of the UM team who attended this year’s conference include Chair Professor Rui Martins, director of the lab and the institute; Mak Pui-In, deputy director (research) of the institute; Sin Sai-Weng, deputy director (academic) of the institute; Associate Professor Law Man-Kay; Assistant Professors Zhu Yan, Chen Yong and Chan Chi-Hang; doctoral students Qi Liang, Jiang Wenning, Yang Xiaofeng, Wang Wei, Yang Zunsong, and Guo Hao; doctoral graduate Chen Zhiyuan; and post-doctoral fellow Zhang Minglei.

Jiang Yang, a doctoral student of microelectronics at UM, received the Pre-doctoral Achievement Award from the IEEE Solid-State Circuits Society at the conference, in recognition of his outstanding research in the field. Two other PhD students of microelectronics from the lab, namely Fan Chao and Guo Mingqiang, were invited to make presentations in the Student Research Previews section. Peng Xingqiang, who made a presentation in the Student Research Previews section last year, received the Student Research Preview Award at this year’s conference. One of the papers from UM was selected for onsite demonstration. In addition, Prof Mak Pui In received the certificate of fellowship from the IEEE at the conference, for his contributions to the fields of radio frequency and analog circuits. He is the first native of Macao to receive this prestigious honour.

Organised by the IEEE Solid-State Circuits Society, the ISSCC is the most prestigious international conference in the field of electronics, with a rigorous paper selection process. It is also the world’s largest and highest-level conference on solid-state circuits held annually, which showcases the latest global trends in solid-state circuit research and development. This year’s conference attracted more than 3000 chip designers from around the world. The UM team’s participation in this year’s event was sponsored by Macao Science and Development Fund and the university. 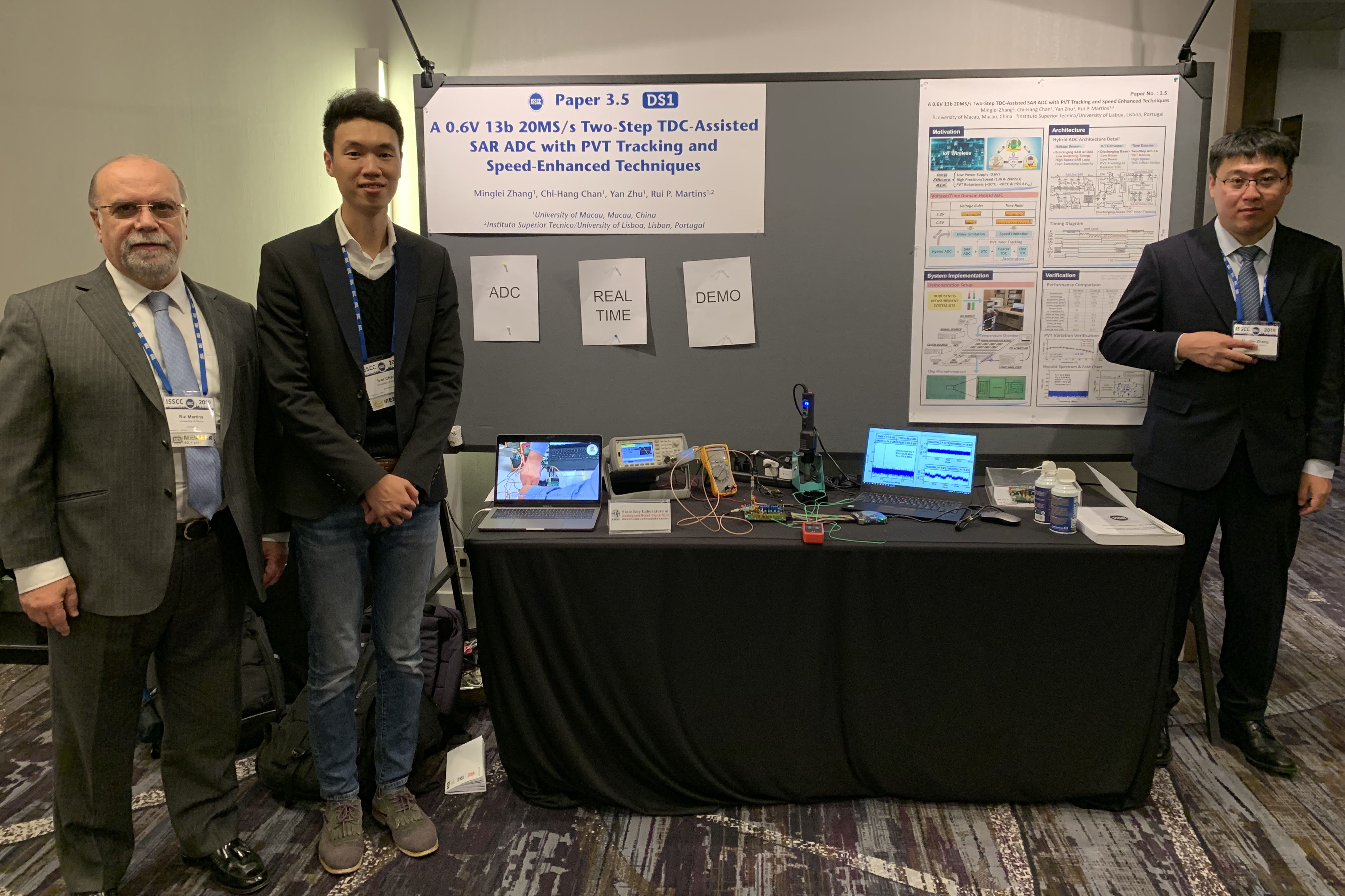 Real-time live demonstration of a prototype designed by the UM team at the ISSCC 2019. 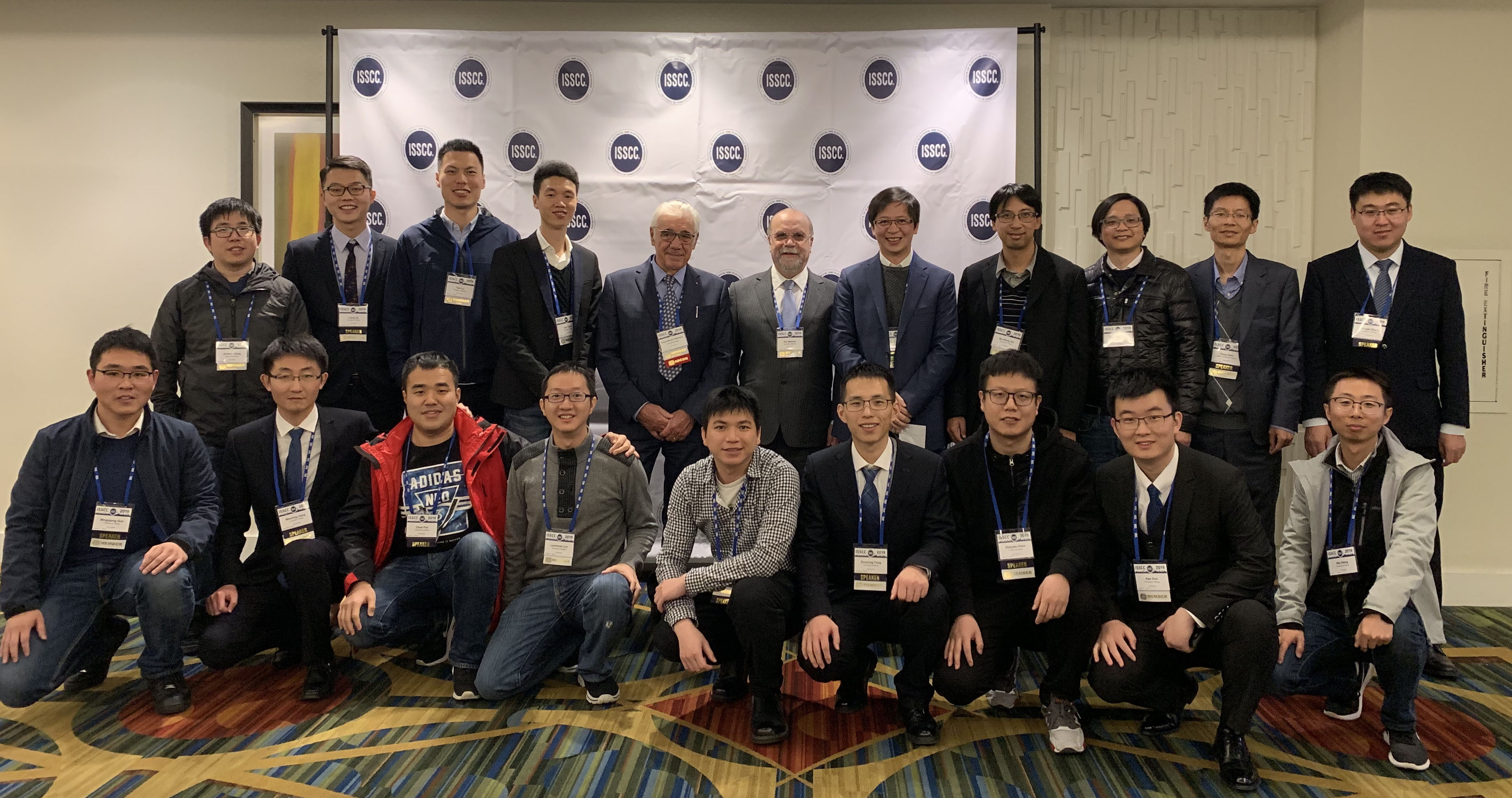 A group photo of the UM research team