Tang Kuok Hou is a local artist and an alumnus of the University of Macau’s Department of Sociology. His works mainly deal with interesting but oeat subjects such as artificial light sources, which he says are inspired by his education in sociology and anthropology. About a year ago, tired of his nine-to-five lifestyle, he quit his job and became a full-time artist. Asked what prompted him to make that decision, he says, ‘I knew the road ahead was not going to be easy, but I just wanted to do what I was passionate about while I was still young.’

Tang’s current studio is located in Macao Art Garden, the city’s first venue dedicated to local artistic creation and exhibition. So far nearly 50 artists have established studios there, and Tang is one of the few full-time artists among them. Tang’s studio is less than 100 square feet, but he says it does not hinder his creative process, because the entire society actually serves as his studio.

After graduation from high school, Tang was admitted to the Department of Digital Media Design at Ming Chuan University in Taiwan. But after spending two years in Taiwan, he realised that design was not a career path he wanted to follow. So he returned to Macao to pursue a degree in the Department of Sociology at UM. The programme in sociology taught him to look at society from different perspectives and prompted new ideas about how he might depict society with his camera. ‘Ever since my college days, I have been raising questions about life, such as what is the relationship between man and society?’ he says.

Over the past few years, artificial landscapes have been the main subject of Tang’s works. ‘Landscapes were created for humans, but if the created space fails to interact with humans, I would start to think about the original meaning of space,’ he says. His daily observations led him to the realisation that the urban environment is actually a kind of artificial landscape, and is also the result of man’ acclimatisation to the natural environment. ‘For instance, photosynthesis normally only occurs during the day. Cities are the only place where photosynthesis also occurs at night. But we should not think of light pollution only in terms of its damage. If there were no lights to illuminate the city at night, the various functions of a city would come to a halt,’ he says.

Sociology teaches critical thinking, but it also provides objective knowledge about the persistence of social norms and forms. Many of Tang’s works, including Acclimation and Line, are visual representation of the theories he has learned in sociology. ‘­There aren’t many photographers in Macao who focus on landscapes, so the local audience isn’t very familiar with this subject. Currently the collectors of my works are mostly foreigners.’

Tang’s works have a unique style. He attempts to deconstruct people’s stereotyped impressions of cities and then reconstruct that impression by reconnecting people, community, places, nature, and memory. His works are not merely documentary photographs; they reflect his observations and interpretations of society. Indeed, each work is a field study in sociology. Apart from Human Scenery, his works are completely devoid of human presence. But there are always clues, such as buildings and artificial light sources, that point to human activity. ‘Although you can’t find humans in my works, you will discover the interaction between humans and the city through these subtle clues,’ he says. ‘I don’t want to show humans’ impact on the natural environment in an explicit way. I want the audience to discover on their own how humans affect and interact with nature in the same way a detective pieces together clues to solve a case. I think it’s more interesting that way.’

Tang is grateful to his professors from the Department of Sociology, especially Associate Professor Peter Zabielskis and Assistant Professor Lu Chia-Wen. ‘I would often discuss questions with my professors after class, and they would comment on my works and offer very good suggestions,’ he says. ‘Since my college days, Peter and I have been discussing the different viewpoints in sociology, and he has also taught me many valuable life lessons. These discussions have inspired my works and made me see life in a different way.

Apart from his background in sociology, his childhood experiences are also an important influence on his works. He grew up in a tenement in the Horta e Costa District where people enjoyed close relationships with their neighbours. But the fast economic growth in Macao led to a large influx of labourers and a rapid expansion of housing estates, which in turn caused such close neighbourly relationships to dissipate. Tang still remembers looking up, as a child, and seeing the sky crisscrossed with power lines, a scene he rarely sees now. The power lines in his work Line shows the changes in the residential communities and the ever-distant relationship between people. ‘With the constant restructuring in the housing estates, human interaction is becoming more and more a matter of going through the motions. And gradually, coldness becomes the default way in which people treat each other. I hope my works can help foreigners understand that apart from casinos, there are also these kinds of buildings in the old part of the city. More importantly, I want to help people understand the changes in the Macao society and the cold way in which people habitually interact with each other,’ he says.

Before becoming a full-time artist, Tang worked as a part-time artist’s assistant in college, during which time he actively participated in art exhibitions and competitions both at home and abroad. After graduation, he held a clerical job for a year, but then decided to quit to become a full-time artist. ‘I only live once. To me, spending eight hours every day in the office doesn’t seem like a sensible way to spend this once-only life,’ he says. He encourages students to discover their vocations as early as possible. ‘Finding your vocation will make you happier. Your vocation may not become a full-time job, but it can become a second career that you can work on for the rest of your life. 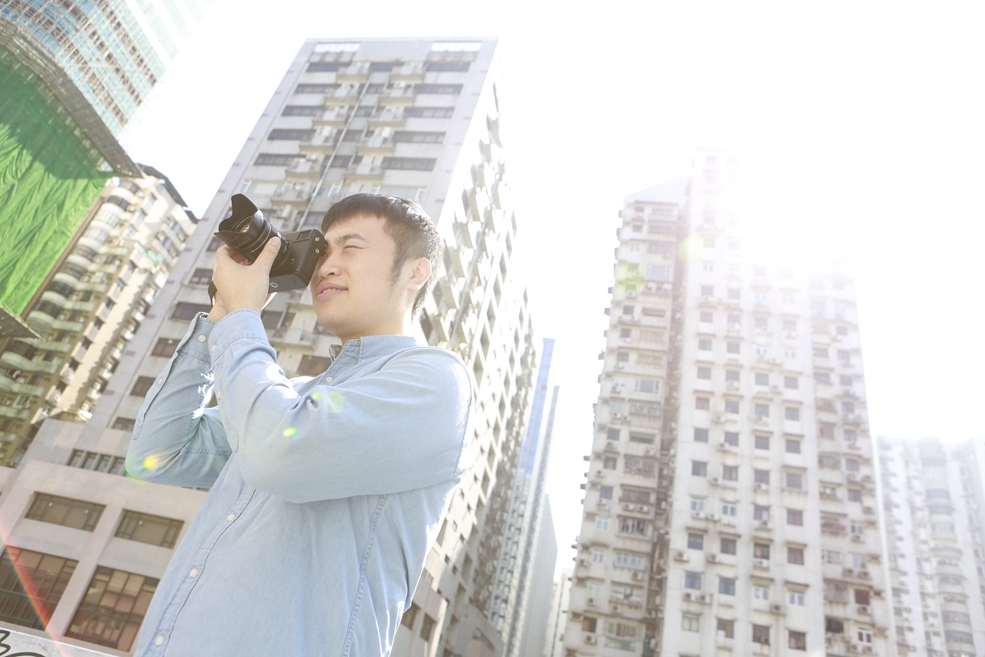 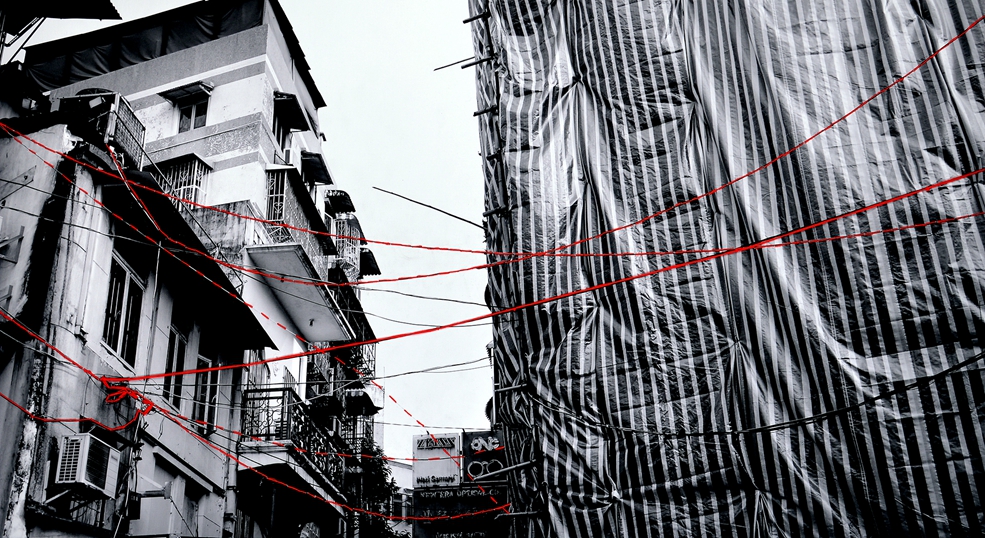 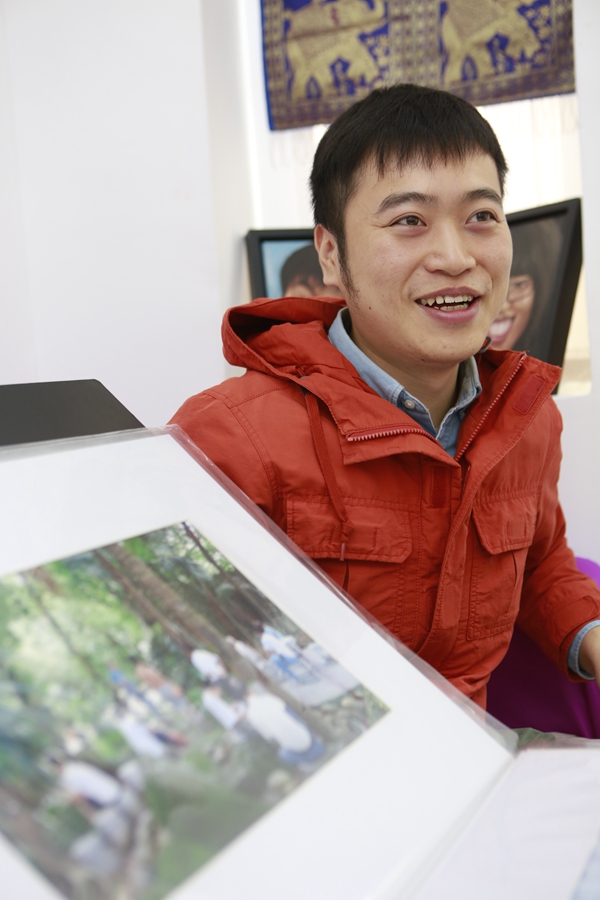 Tang’s works are greatly influenced by his childhood experiences