Prof Tang Zikang: ‘I hope to let the world know there is cutting-edge nanotechnology research in Macao’

Nanotechnology is being used more and more in everyday products. Nano-products not only create enormous economic benefits and improve people’s quality of life, but have also generated widespread interest in the fascinating nanoscale world. Prof Tang Zikang, a world-renowned expert in the field of nano-optoelectronic materials, joined the University of Macau in January 2016, as the director of the Institute of Applied Physics and Materials Engineering (IAPME). ‘The institute provides a platform for cutting-edge applied research,’ says Prof Tang. ‘There are many outstanding scientists from Macao who are now scattered all over the world, and I hope we can attract these people so that the world may gain a new understanding of Macao.’

Since he became the director of the IAPME, Prof Tang has been personally involved in every aspect of the unit, from preparing to establish a laboratory, to purchasing equipment, to recruiting international scholars. ‘We’ve encountered many unforeseen difficulties in the process,’ he says. ‘Many of the university rules and regulations were created in the 1980s, and they are clearly outdated in the face of rapidly advancing science and technology. As a result, many things are progressing very slowly.’

The institute’s laboratory is currently under construction. Our interview took place in a laboratory in the Research Building N23. ‘These are all state-of-the-art devices,’ says Prof Tang. ‘Take this focused ion beam (FIB) system for example. It is very powerful. Not only can it serve as a scanning electron microscope to perform atomic-scale ablation and deposition of materials; it can also conduct real-time analysis of the elements of materials.’

Prof Tang recruits staff with different academic backgrounds, in an effort to inspire more innovative research. Currently there are more than ten teaching and research staff at IAPME, from different countries and regions, including the United States, Europe, Japan, Hong Kong and mainland China.

Prof Tang has had a strong interest in physics since he was a child. After graduating from college, Prof Tang went on to pursue further studies, first at the Changchun Institute of Optics, Fine Mechanics and Physics, Chinese Academy of Sciences, and later at Tohoku University in Japan. In 1992, he received a doctoral degree from Tohoku University. In 1994, the Department of Physics at the Hong Kong University of Science and Technology (HKUST) began to recruit faculty members from abroad, and Tang joined the institution. Over the past 21 years at HKUST, he mainly focused on nanotechnology research.

In Prof Tang’s college days, a popular piece of advice for students said, ‘Learn mathematics, physics, and chemistry well, and you will never have to worry about finding a good job no matter where you go.’ Indeed, many of Tang’s contemporaries were drawn to subjects like maths and physics because of practical considerations of career prospects. But Prof Tang chose to study physics purely out of a genuine interest. ‘When I was a child, I felt an innate sense of curiosity about the various natural phenomena,’ he says. ‘Why is coal black? Why is the snow white? And why is the sky blue? I would wonder about these questions.’ After graduating from college, he had the opportunity to study the properties and functions of materials. He discovered that nano-scale materials sometimes have radically different properties compared to the same materials at bulk scale; sometimes completely new functions emerge at nano-scale. This phenomenon begs the question: How can these new properties and functions that emerge at nano-scale be applied to develop new devices?

In 1998, Prof Tang attended the annual meeting of the American Physical Society and presented a paper on his newly developed carbon nanotubes. ‘The chair of the meeting and those in the audience were all leading authorities on carbon nanotubes,’ he recalls. ‘The smallest single-walled carbon nanotubes (SWNT) at the time had a diameter of 0.7 nanometers, and the general consensus in the scientific community was that it was impossible to develop SWNTs with a diameter smaller than that. But we announced that our SWNTs had a diameter of only 0.5 nanometers [which later measurement showed to be only 0.4nm]. While I was still giving my presentation at the podium, I heard voices of doubts rippling through the audience. People were saying, producing an SWNT with a diameter of less than 0.7nm was impossible. I felt very embarrassed, but I had to bite the bullet and finish my presentation.’

Prof Tang used to have a picture of Albert Einstein hanging on the wall of his office at HKUST. In the face of doubts, he would use Einstein’s example to motivate himself. ‘Einstein is my hero,’ he says. ‘When he first published his theory of relativity, few people could appreciate its profound beauty, but later the theory was experimentally verified.’

In 2000, Prof Tang successfully developed the world’s smallest SWNTs with a diameter of 0.4nm, and observed novel one-dimensional superconductivity in these ultra-small SWNTs, causing a stir in the global scientific community. His discovery was hailed as one of the 11 most important achievements in physics in 2001.

As a veteran expert on materials research, Prof Tang considers physics to be the foundation of all sciences. ‘Almost all the materials and devices you see today have to do with physics,’ he says. ‘For example, the transistors in the chips in the TV sets, mobile phones and computers are a typical application of semiconductor nanomaterials. Unlike engineers and technicians, scientists focus more on making new discoveries and developing new materials. But sometimes, because of technological constraints, new discoveries cannot be converted to practical applications right away.’

Prof Tang cites the physical phenomenon known as ‘quantum entanglement’ as an example. Quantum entanglement was discovered in the 1930s. For half a century after its discovery, scientists struggled to find practical applications. It wasn’t until recent years, when new breakthroughs were achieved in nano-machining technology, that research on quantum entanglement was finally able to progress significantly. Now quantum entanglement has found applications in various fields, including quantum computing, secure quantum communication, and even biological information transfer. ‘Scientific research is important because the results of scientific research can change our way of life and make our lives easier, but what’s equally important is that a scientific mindset can change people’s way of thinking, which in turn helps to improve the scientific literacy of the citizens,’ says Prof Tang.

Prof Tang’s research interests cover a wide range of areas of physics. In addition to the world’s smallest SWNTs, his research on zinc oxide has also attracted considerable attention worldwide. In 1998, Prof Tang discovered room-temperature ultraviolet laser emission from self-assembled zinc oxide (ZnO) microcrystallite thin films. The subsequent paper he published on the subject immediately generated significant interest from scientists around the world. The groundbreaking discovery not only ignited a worldwide interest in ZnO research, but also opened up a wide range of potential applications for ZnO semiconductors in UV laser diodes. The pioneering paper he published in 1998 in the Applied Physics Letters of the American Institute of Physics, has been cited more than 2,100 times. In 2012, the same paper was listed as one of the 50 most cited papers over the past 50 years in Applied Physics Letters .

The IAPME will prioritise applied research that is of direct relevance to Macao residents, such as research on new energies and new materials. ‘This way we can create some positive effects on society,’ he says. ‘We will also conduct basic research once we have attained satisfactory results in applied research.’ 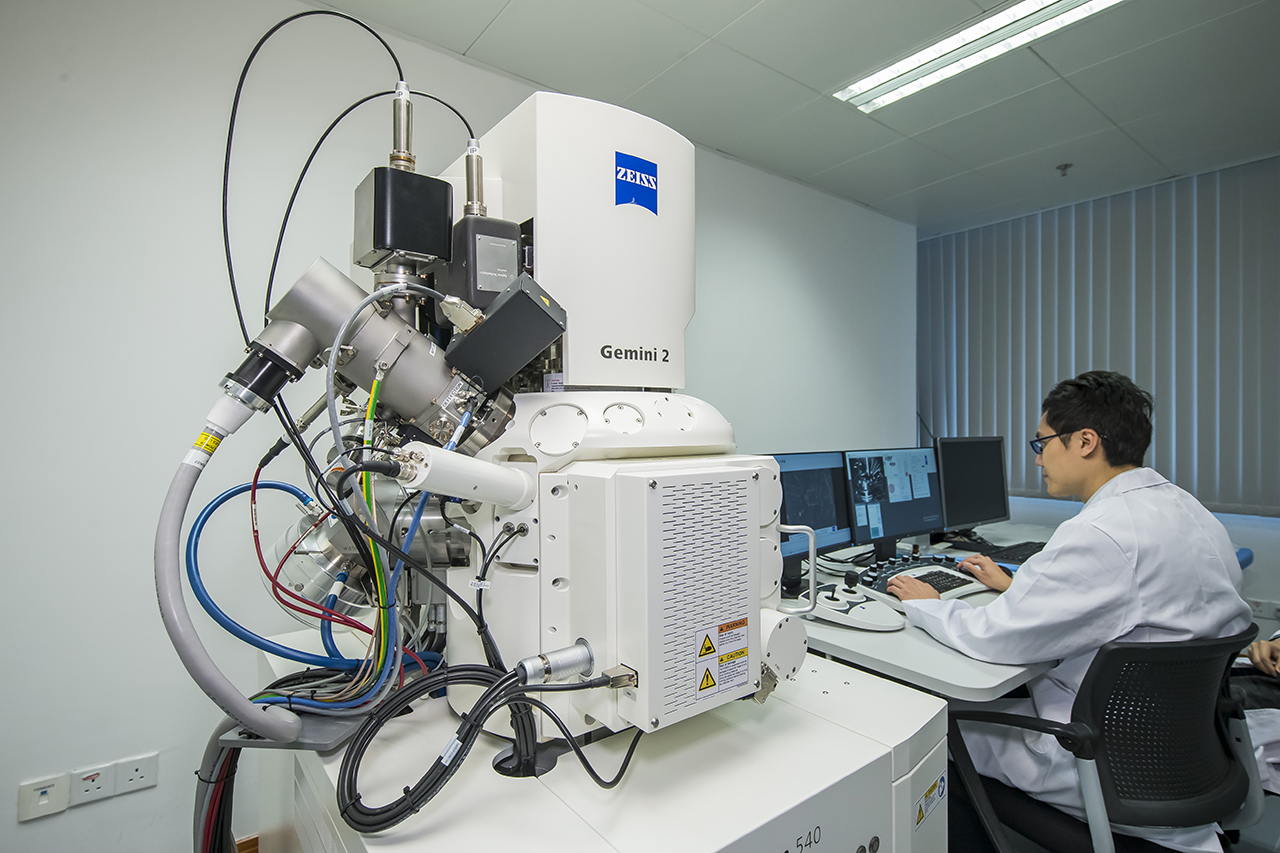 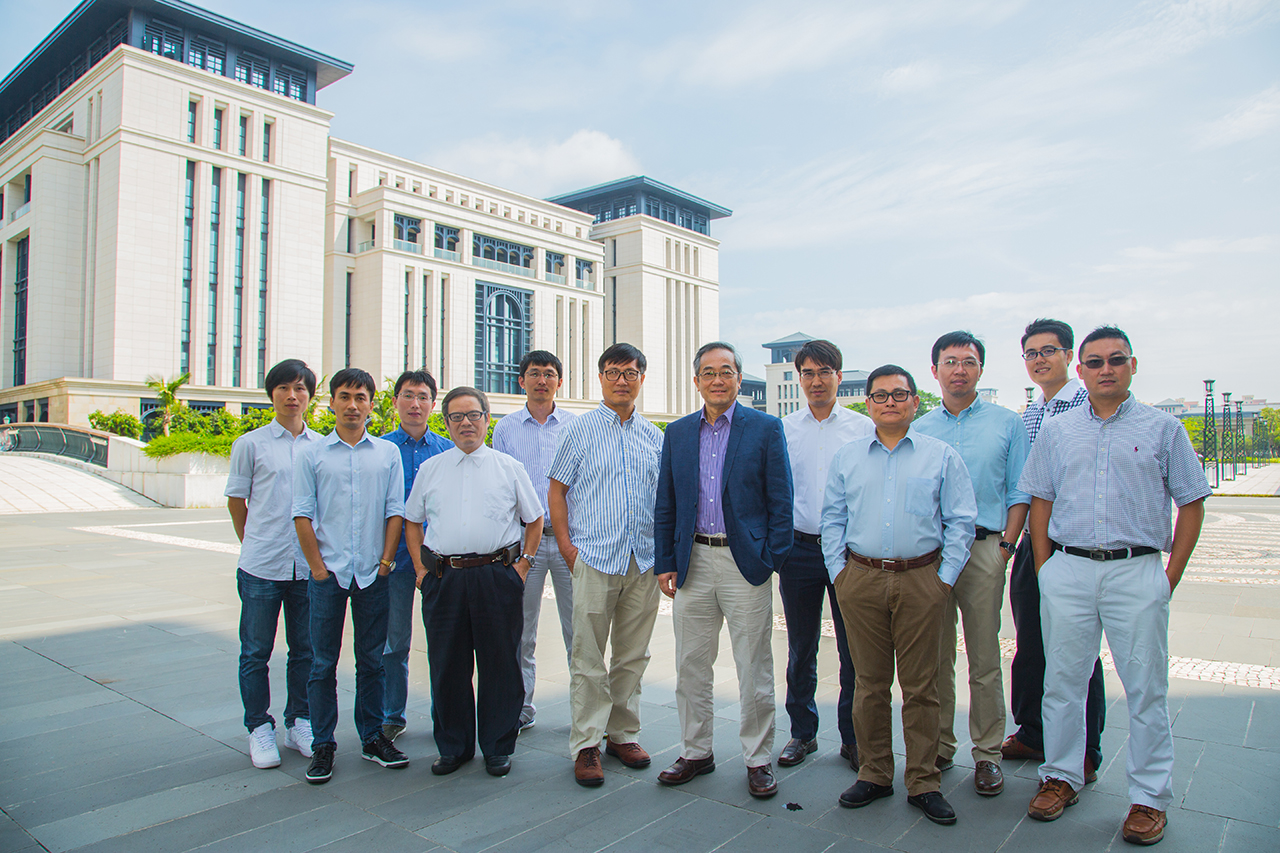 Currently there are more than ten research and teaching staff in the institute, including Vice Rector (Students Affairs) Prof Haydn Chen (7th from left) 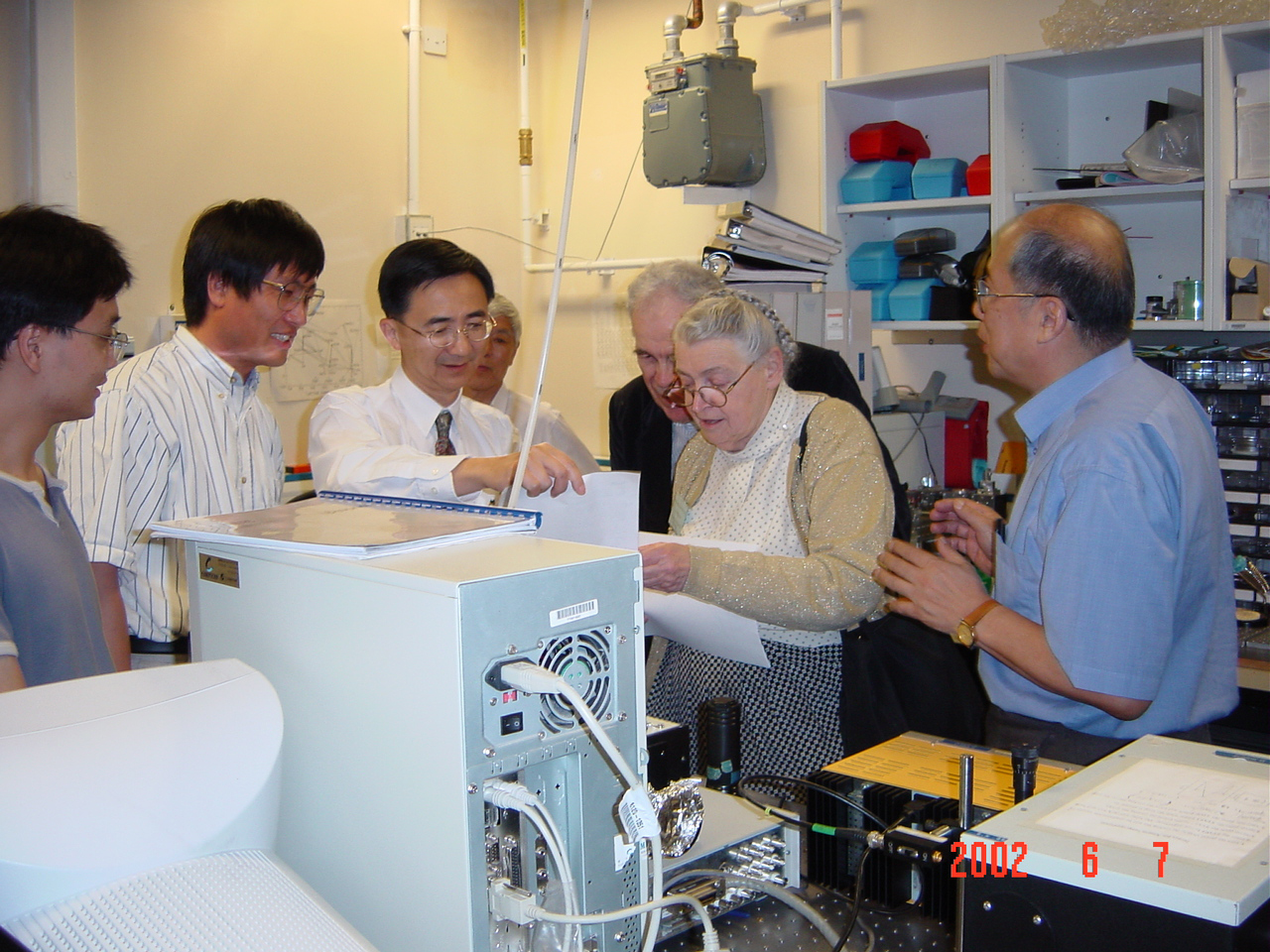 Prof Mildred Dresselhaus from the Massachusetts Institute of Technology, a renowned physicist and one of the pioneers in carbon nanotube research, and her husband, visit Prof Tang 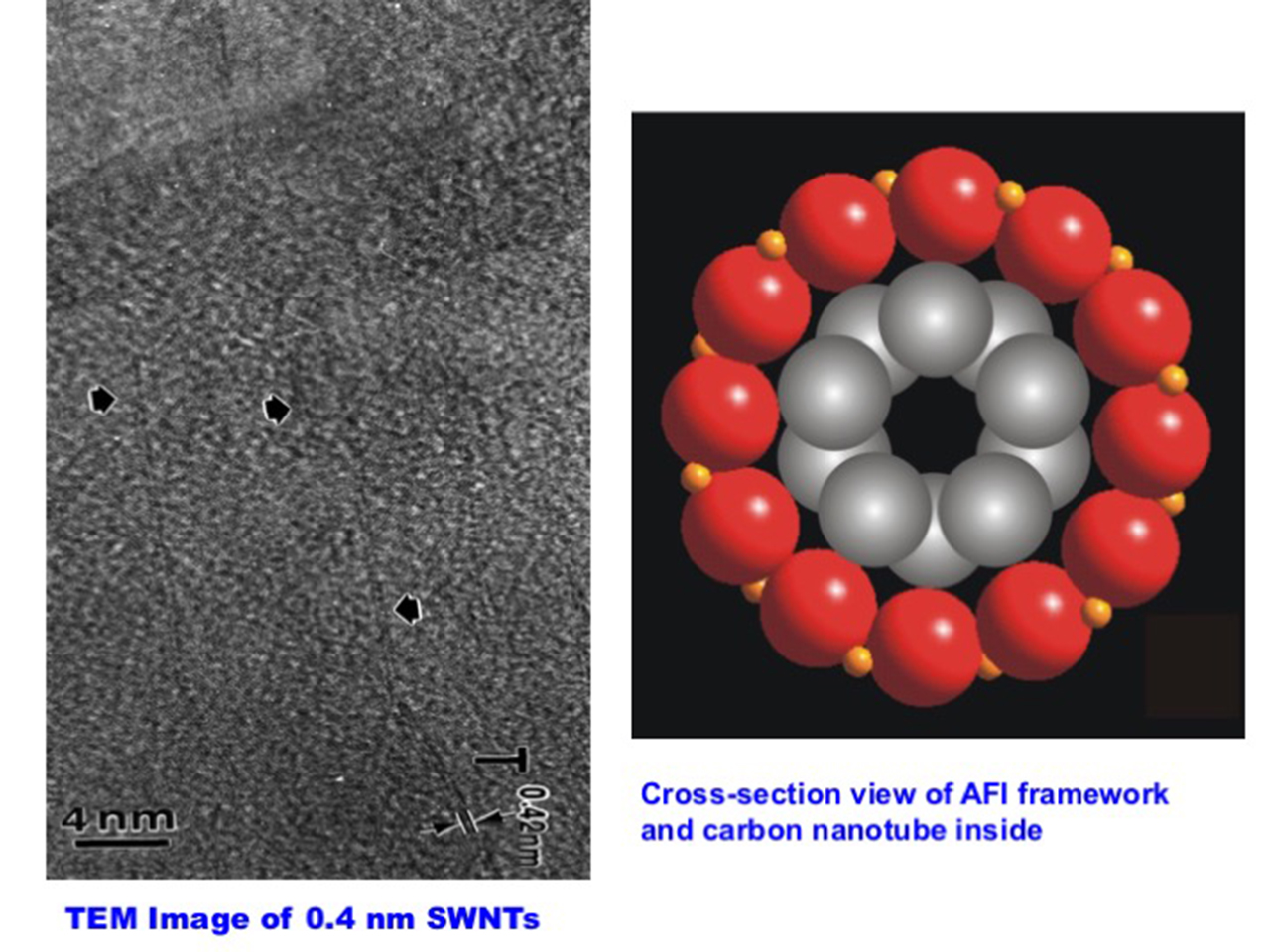 The world’s smallest single-walled carbon nanotubes (with a diameter of 0.4nm) 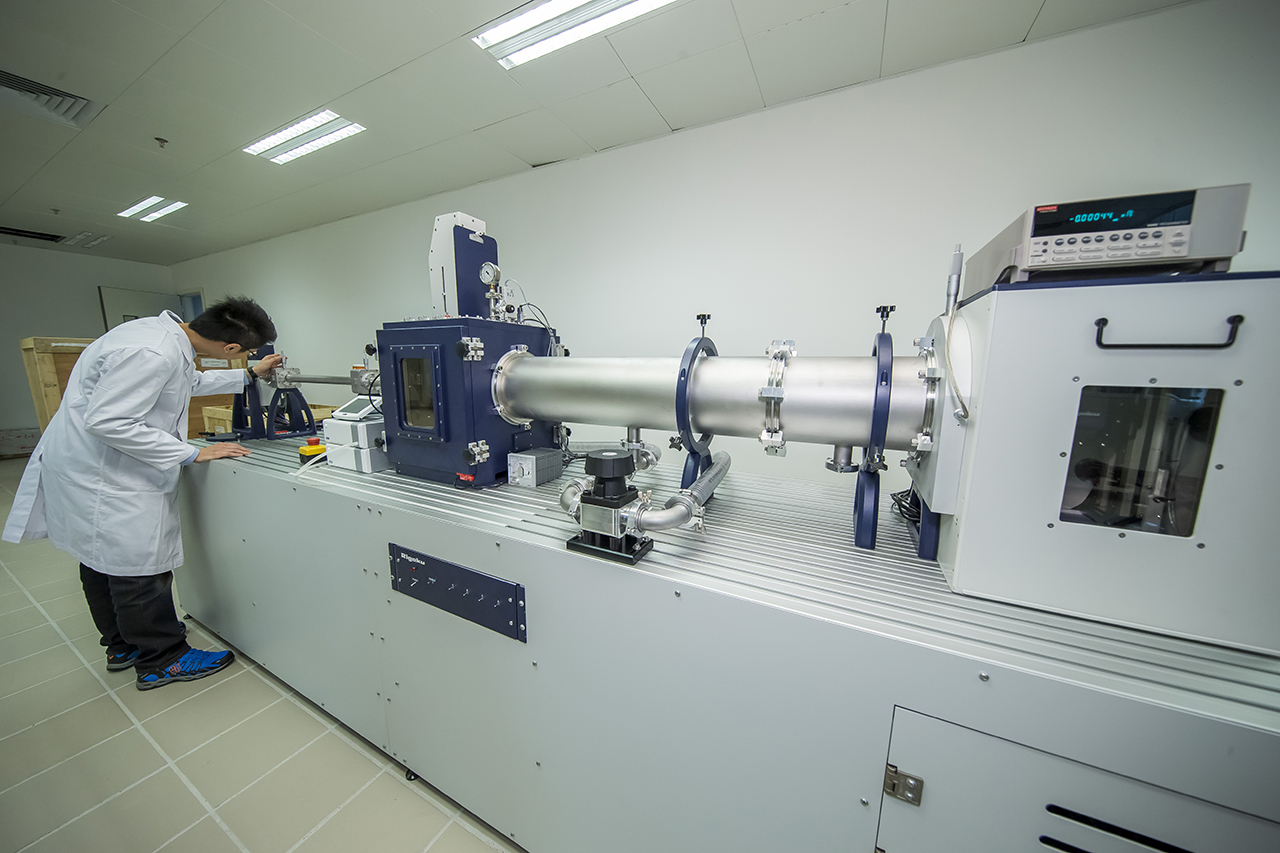