Two UM students will go to France for a scholarship-funded exchange and study stint. The scholarship, awarded by the Consulate General of France in Hong Kong and Macao, mainly targets Macao university students who study French in Alliance Française de Macao and achieve excellence. Being awarded this scholarship is full recognition of UM students’ excellence in foreign language ability.

These two students, namely Cheong Tou Un, a fourth-year student from the Faculty of Education majoring in English, and Eugenia Lao, a third-year student from the Faculty of Business Administration majoring in Gaming Management, will go in early August to the Institut linguistique du Peyrou in Montpellier, a southern French city, for a three-week study and exchange stint during which period they are going to study French, attend cultural courses and visit local community to learn more about the local language, culture and customs, they will also have opportunities to broaden their horizons by interacting with students from around the world.

Both students were pleasantly surprised by the good news, saying they were very grateful to Alliance Française de Macao for its recommendation. Cheong Tou Un recalled how he gradually developed interest in French from learning it with a friend, and how he persisted in studying until now. He said: “it is very fulfilling to be able to directly communicate with French people, plus, France is a country with rich culture, learning French can help me explore the profoundness of the French culture”. Apart from seizing every opportunity to practise listening, speaking, reading and writing skills, Cheong said Rule No. 1 for learning any foreign language is never be afraid of losing face or making mistakes because mistakes help you improve. During his spare time he would watch French movies, listen to French songs or browse French websites, using whatever interests him to improve his French. He relished the prospect of meeting more foreign friends and broadening his horizon. He also hopes he can take this opportunity to help promote Macao’s culture.

Eugenia said learning foreign language is a long process that requires unrelenting perseverance, and sometimes you might get frustrated when you can’t progress as fast as you wish. “Whatever foreign language you learn, you will inevitably encounter difficulties, but as long as you don’t give up, you will make progress, and if one day you suddenly find yourself talking to foreigners in fluent French, you will know that kind of joy and fulfilling feeling just can’t be described with words”. Eugenia also stressed that Macao is a global metropolis, which means the opportunities to use foreign languages will be greater than ever before. Therefore, students who can speak more than one foreign language are sure to find themselves at a more competitive position in global competition. Eugenia said she chose Gaming Managemetn because it is the most interesting major in the Faculty of Business Administration and learning French will help her future career development. She ’s planning to study business in Paris after graduation from UM and hopes to find a job related to her major.

Every year the Consulate General of France in Hong Kong and Macao will award different kinds of scholarships to Macao university students who achieve linguistic excellence in hopes of encouraging them to keep on working hard and strive for constant improvement.

Caption: Eugenia Lao (right) and Cheong Tou Un will go to France for a scholarship-funded exchange and study stint. 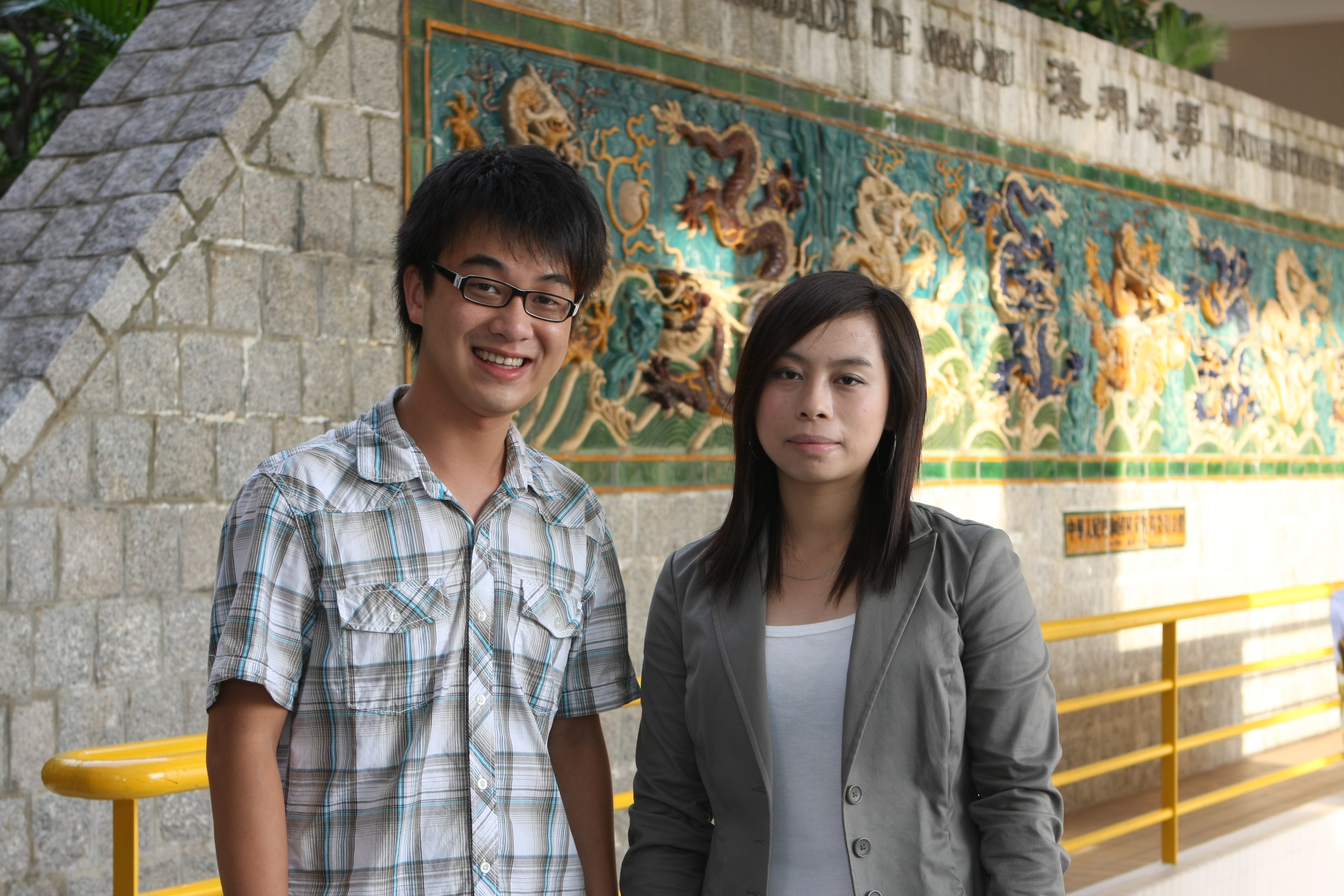