There are 28 private roads and 10 public roads on the new campus (see attached tables), and their names have been finalised. Whether you personally like these names or not, you are probably curious about their origins and meanings. So here we go.

Some names either have quite straightforward meanings or convey straightforward wishes, like Victory Avenue, Learning Street, Student Street, and Scholar Street. Some streets are named after trees and flowers which are considered to symbolise good things in the Chinese culture, like the Peach-Plum Street (“peach-plum” is often used when describing a teacher with a lot of accomplished students around the world), Apricot Street (“apricot” in Chinese can also mean a very good doctor), Pine-Cypress Street (“pine” is a symbol of longevity), Cotton Tree Circle (“cotton tree” stands for integrity and courage).

Two names, Luminous Virtue Avenue, and Perfect Goodness Avenue, have their origins in the Great Learning (otherwise known as Da Xue), which is one of the four classical works in Confucianism. They express the university’s wish to nurture graduates with good moral character. The Lotus Avenue in the north is named after the flower lotus, which is the symbol of Macao. Similarly, the Daisy Avenue in the south is named after a very famous daisy native to Portugal. The two avenues look across at each other, signifying that the interaction of eastern and western cultures blossoming into cultural diversity at the university. The Godspeed Avenue is located near a parking area for public vehicles. The name expresses the wish for no traffic congestion. “Residence Avenue” says that the new campus is a beautiful, nice place to live. As for the “Alumni Avenue”, the university hopes that future graduates can leave on the avenue something that they think can best represent their memories of their lives on the campus (e.g. a tree, a flower).

Many of the names are easy to remember and indicative of the locations of the buildings. Examples include Central Avenue, Library North, Mall Street, Faculty 1st Lane, and College 2nd Lane. 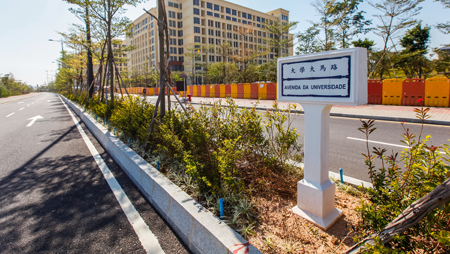