The University of Macau’s (UM) Ceremony for Conferment of Honorary Degrees and Higher Degrees 2012 was held today (16 November). Dr. Chui Sai On, chief executive of Macao SAR and chancellor of UM, presided over the ceremony and met with three honorary degree recipients. In his speech, Dr. Chui said that UM has made progress in soft and hard strengths, with rapid advancement in scientific research, and with the new development mode, UM should shoulder greater responsibility and become the backbone of Macao’s cultural innovation and science and technology development. He said that the SAR government will continue to provide policy- and resource-wise support to UM in its future development.

At the ceremony, UM conferred honorary doctorates upon Prof. Arden Lee Bement, Jr., Dr. Ambrose So Shu Fai and Prof. Andrew Chi-Chih Yao, in recognition of their outstanding contributions in the areas of research, culture and education. PhD degrees, master’s degrees, postgraduate diplomas and certificates, and the Outstanding Academic Staff Award were also presented at the ceremony.

UM Rector Wei Zhao congratulated honorary degree recipients and the 427 postgraduates. He said sports train people’s mind and body while research helps people explore the unknown and challenge the limit. That’s why Macao needs scientific research in. He said in recent years, thanks to UM’s vigorous support of research, the university has made significant advances in scientific research, as evidenced by the numerous prestigious awards in science and technology. He thanked students, alumni and faculty for their concerted efforts and contributions.

Prof. Andrew Chi-Chih Yao, representative of the honorary degree recipients, said in his speech that UM best exemplifies Macao’s achievements in education. With a history of over thirty years, UM excels in teaching, research and community service. Under the leadership of Rector Wei Zhao, UM has evolved its own character and enjoys academic freedom. All this puts the university in good stead for realizing its goal of becoming a world-class university.

Prof. Mok Kai Meng, dean of the Honours College, highly commended Prof. Arden Lee Bement, Jr. in his citation. He said that over the years, Prof. Bement has led various significant programmes and activities, benefiting the world with his science and engineering contributions, from managing programmes in metallurgical research, nuclear structural materials, defense weapons technology, biomaterials, manufacturing technology, isotope power sources, to the design, fabrication and irradiation testing of advanced nuclear fuel elements, and application of competitive technologies. In academia, Prof. Bement has led teaching and research programmes to facilitate understanding, formulating and shaping of policy on critical issues in areas such as economics, agriculture, poverty, climate change, and energy sources for improving people's lives. He was the director of the United States National Science Foundation (NSF), leading the agency to advance in its mission of encouraging, identifying and funding the best ideas and most promising people for the benefit of the world.

Prof. Jacky So, dean of the Faculty of Business Administration, highly commended the accomplishments of Dr. Ambrose So Shu Fai in his citation today. As he said, “Dr. So is a cultured man of action with a heart for his nation, and serves as a role model for others."  Dr. So holds numerous important positions, including being a member of the National Committee of the Chinese People's Political Consultative Conference, Honorary Consul of the Republic of Portugal in Hong Kong SAR, and a member of the Economic Development Council and of the Cultural Consultative Council of the Macao SAR government. He works with relentless effort toward the sustainable development of Macao's economy, and is committed to advancing exchange and cooperation among Macao, Hong Kong, China and Portugal. Dr. So is currently Chief Executive Officer of SJM Holdings Limited. In 2008, he ushered Macao into the international financial market by planning and facilitating the Hong Kong stock exchange listing of SJM, Macao's only locally rooted gaming concessionaire. A gifted calligrapher, Dr. So is dedicated to the promotion and development of Chinese culture, and has organised many activities promoting cultural exchange over the years. Dr. So has been awarded the Medal of Merit - Culture by the Macau SAR government.

Prof. Philip Chen, dean of the Faculty of Science and Technology, highly commended Prof. Andrew Chi-Chih Yao in his citation. He said that Prof. Yao has made many original and significant contributions to computer science, including laying concrete foundations for modern cryptology on which computational complexity is based, formulating the theory of communication complexity and the theory of pseudo-random number generation, and establishing a new paradigm for quantum computation, communication complexity and teleportation. In 2000 Prof. Yao was awarded the Turing Award by the US Association for Computing Machinery (ACM), becoming the first Chinese scientist to have won this prestigious award ever since its founding. Prof. Yao was under the tutelage of distinguished computer scientist Prof. Liu Chung Laung, who received his early education in Macao and who was also a recipient of an honorary doctorate from UM.

The Most Venerable Master Hsing Yun, recipient of the Degree of Doctor of Humanities honoris causa, was not able to attend today’s ceremony. Conferment of the honorary degree on Master Hsing Yun will be held separately. Prof. Hao Yufan, dean of the Faculty of Social Sciences and Humanities, highly commended Master Hsing Yun in his citation. He said that Master Hsing Yun is noted for his benevolent karma of advocating for Humanistic Buddhism. His Buddhism faith translates into deep compassion and compassion into philanthropic acts. He developed a system of the philosophy of Humanistic Buddhism that opens up wider study of Buddhist logic (Hetuvidya), purifies people’s mind through sangha and performs philanthropic deeds for the needy. The manifestation of his compassion is secular rather than just ethereal, his Buddhist wisdom worldly rather than metaphysical, thus giving a new twist to the conventional understanding of Emptiness - the very heart of Buddhist doctrine. He tries to find the best of different faiths as the greatest denominator to bridge the differences, and construct a common religious discourse that can speak to every religion. The Humanistic Buddhism that Master Hsing Yun spent more than seven decades forging sprawls the entire Chinese-speaking communities all over the world. He has founded dozens of kindergartens, primary and secondary schools, sixteen Buddhist colleges, over fifty Chinese schools, and several universities. 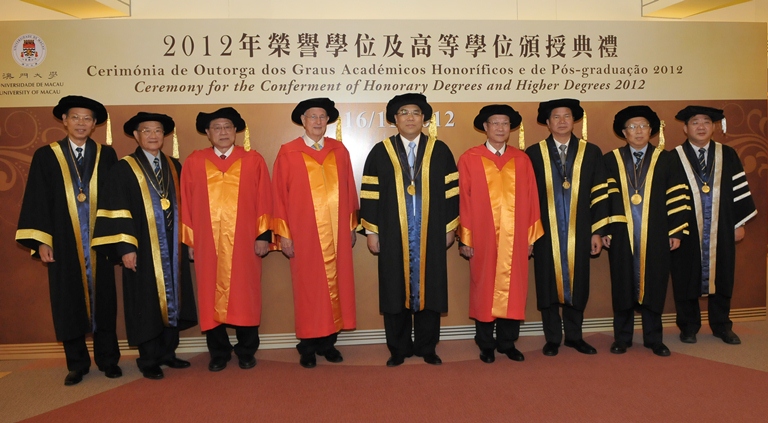 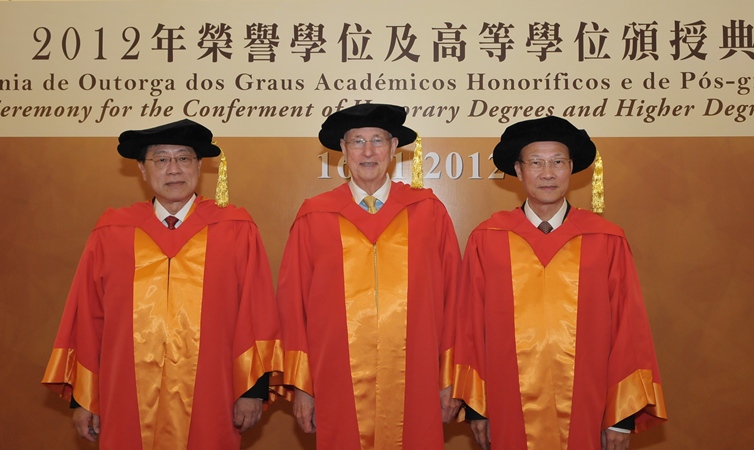 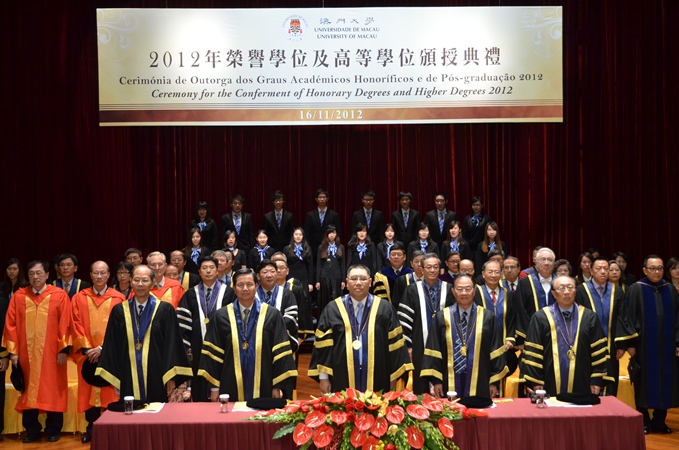 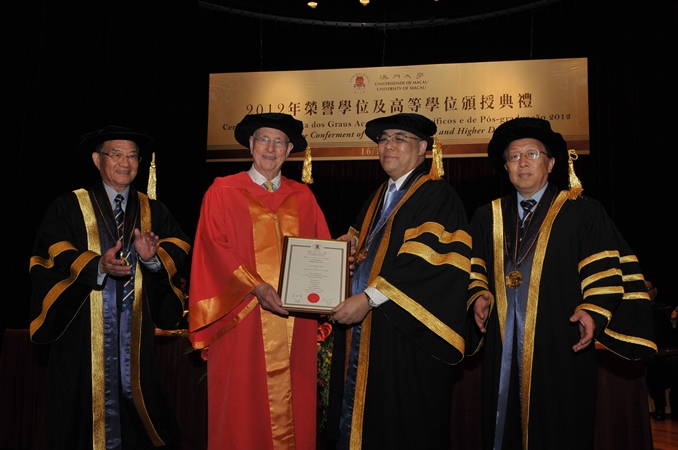 The University of Macau confers the Degree of Doctor of Science honoris causa upon Prof. Arden Lee Bement, Jr. 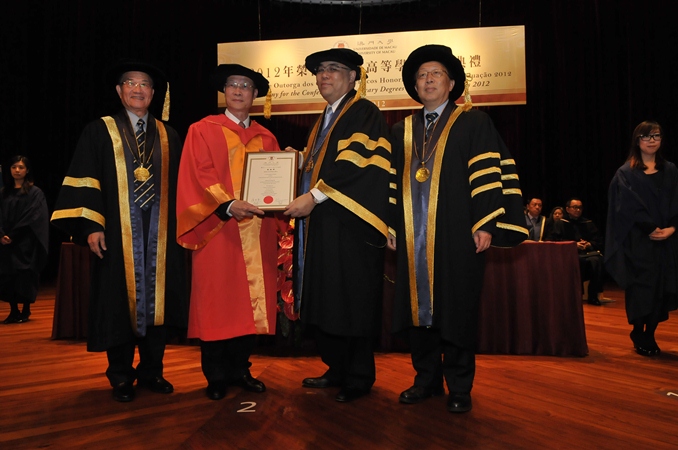 The University of Macau confers the Degree of Doctor of Social Sciences honoris causa upon Dr. Ambrose So Shu Fai 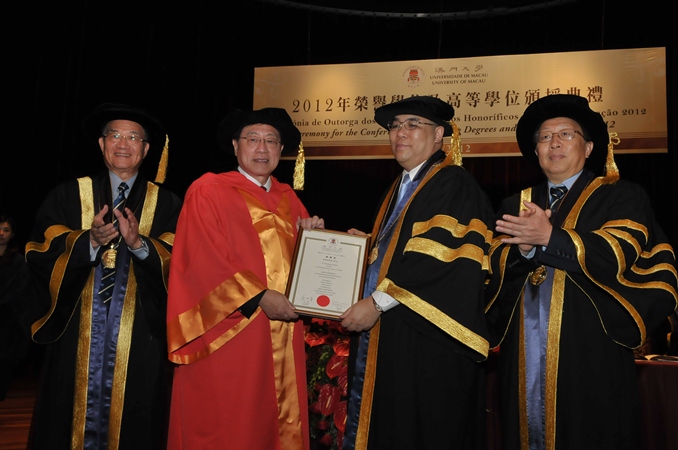 The University of Macau confers the Degree of Doctor of Science honoris causa upon Prof. Andrew Chi-Chih Yao 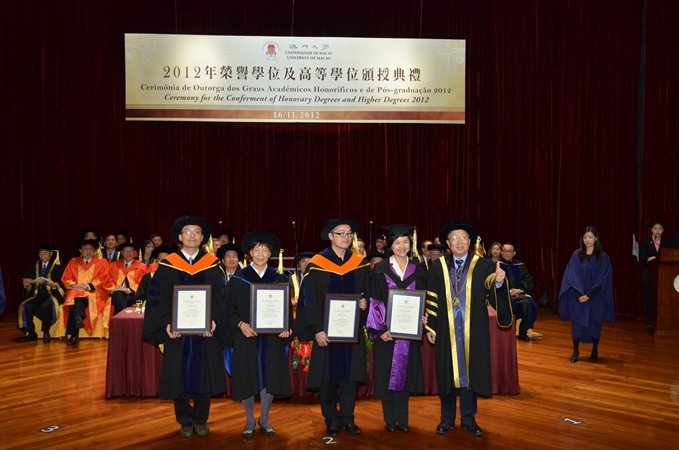