The two-day Macao Forum on Chinese Medicine 2012, co-sponsored by the Macao Foundation and the Science and Technology Development Fund of Macao SAR, opened at the University of Macau (UM) on 7 November (today). This forum consists of three parts, the second World Conference on the Pharmacology of Natural and Traditional Medicines, the first Conference on Chinese Innovative Medicines, and the second PhD Students Forum on Chinese Medicine. The conference brought together over two hundred experts, scholars and PhD students from at home and abroad.

In his welcome speech at the opening ceremony, UM Rector Wei Zhao said that the Macao SAR government attaches great importance to the development of Chinese medicine, and has already identified Chinese medicine as a priority area for future development. UM makes full use of the local advantages and established in 2002 the Institute of Chinese Medical Sciences (ICMS). Over ten years of hard work have created a rich academic atmosphere on campus and have produced a large number of high-calibre research and management professionals in Chinese medicine. These people not only have helped develop ICMS into world-class standards, but also serve as a new bridge of communication and collaboration in the Greater China region. In 2010, the Ministry of Science and Technology of PRC approved the establishment of China’s first-ever state key laboratory in the field of Chinese medicine, which is a significant event in the science and technology history of Macao, and also represents an important step towards internationalization. Rector Wei Zhao expressed his hope that Macao continues to fulfill its role as a cultural bridge between the East and the West, and continues to advance international collaboration and innovations in Chinese medicine, in order to further the development of Chinese medicine in Macao as well as the moderate economic diversification of Macao.

The two-day World Conference on the Pharmacology of Natural and Traditional Medicines is co-organised by the Section on Pharmacology of Natural Products, International Union of Basic and Clinical Pharmacology, the International Society for Chinese Medicine, the Chinese Pharmacological Society, and UM. It is co-hosted by UM’s ICMS and UM’s State Key Laboratory for Quality Research in Chinese. The theme of the conference is “advancing the studies of natural and traditional medicines with new perspectives and new technologies”. The conference mainly discusses, among others, new discoveries based on natural and traditional medicines, basic pharmacology and clinical pharmacology. The conference drew over 160 participants, including over ten experts and scholars, from the United States, France, Japan, Singapore, South Korea, Hong Kong, Sout Africa, India, Pakistan, mainland China and Macao.

Another highlight of the forum is the first Conference on Chinese Innovative Medicines, the first large-scale academic conference ever since the founding of the jioint research centre for Chinese innovative medicines, which was jointly established on 13 February 2012 by four universities from the four territories of Macao, Hong Kong, Taiwan and mainland China. The four universities are Peking University, Taiwan University, the University of Hong Kong (HKU) and UM. The purpose of the joint research centre is to provide a platform for innovative medicines research and development. Han Qide, vice chairman of the National People’s Congress Standing Committee, once commented that the establishment of the research centre had an extraordinary significance. The conference drew thirty scholars from such renowned universities as Peking University, Taiwan University, HKU, UM, Sun Yat-sen University, the China Academy of Chinese Medical Sciences, Guangzhou University of Chinese Medicine, Chengdu University of TCM, and Shanghai University of TCM. They held in-depth discussions on the status quo and future trends of innovations in Chinese medicine.

Should you have any inquiries about the press release, please feel free to contact Ms. Kay Lai at（853）8397 4325 or kaylai@um.edu.mo or visit UM webpage www.um.edu.mo. 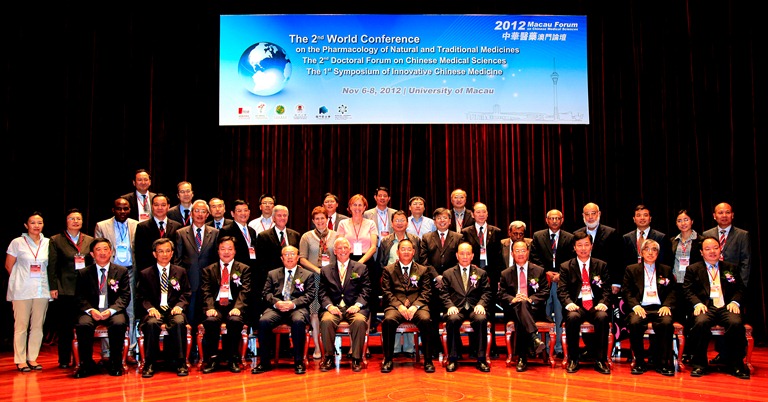 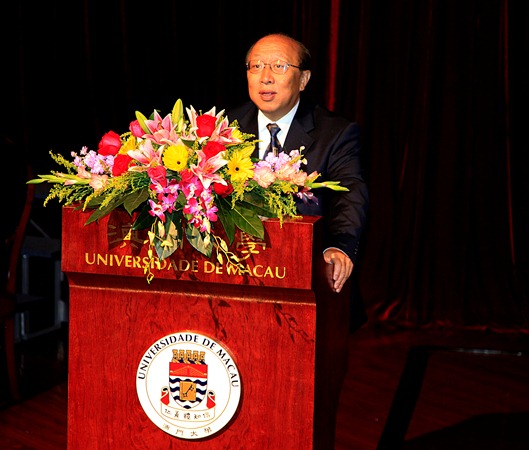