Liu Chao, a PhD candidate of the Institute of Chinese Medical Sciences (ICMS) at the University of Macau (UM), has returned from her internship at the World Health Organization’s (WHO) headquarters. During the half-year internship, Liu was mainly responsible for monitoring and evaluating global universal coverage of health services and traditional medicine. Her report earned high recognition from her senior department director and will be used for WHO’s independent evaluation of China’s new healthcare reform. Liu received her undergraduate and postgraduate training in macular medicine and pharmaceutical economics from Nanjing University and Beijing University respectively, and was admitted to UM in 2010. Her supervisor is Prof. Wang Yitao. Her research interests include pharmaceutical quality management systems evaluation and application of information technology in the relevant studies.

WHO is a specialized agency of the United Nations (UN). It acts as a coordination authority on international public health. WHO commits to building future global leaders in public health, and competition for internship opportunities at its headquarters in Geneva, Switzerland, has been particularly fierce. Among the tens of thousands of applications from all over the world, only 4.3% were successful. Liu stood out from the rest applicants and was recruited by the Health Financing Policy Unit in April to participate in the studies of the World Health Report 2010, WHO’s leading annual global publication. The theme of the World Health Report 2010 is health finance and Liu’s assignment was to compare the benefit packages of different countries and report her findings to the department. After fulfilling this assignment, she received another offer from the Traditional Medicine Team to write an evaluation report on traditional Chinese medicine during China’s new health care reform from 2009 to 2010. The report earned recognition and approval from her senior department director, and will be used for WHO’s independent evaluation of China’s new health care reform.

During her internship, Liu received intensive training in systematic review and policy evaluation skills, and attended academic seminars and meetings. She also joined the 64th World Health Assembly, and participated in a series of events on the World Health Day, the World No Tobacco Day and the World Blood Donor Day. During these events she met Director-General of WHO Dr. Margaret Chan, the famous singer Ms Peng Liyuan, as well as representatives from the Ministry of Health of the People’s Republic of China, Hong Kong SAR and Macao SAR. Liu said that through this internship, she obtained a wealth of research data, increased her knowledge in global health, developed international cooperation ability, and accumulated valuable experience in cross-cultural exchange. 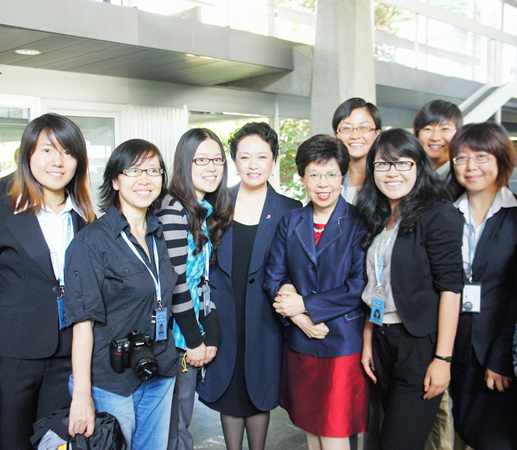