Rector of the Universidade Federal de Minas Gerais (UFMG) Prof. Clélio Campolina and Vice Rector (research) of the University of Macau Prof. Rui Matins, representing the rector of UM, met in Belo Horizonte for the signature of a cooperation agreement on 18 May. This agreement provides for staff and student exchange and development of teaching and research projects between the two institutions.

The agreement was the result of the activities of the Association of the Portuguese Speaking Universities (AULP). Prof. Campolina and Prof. Martins are respectively the current president and vice president of the association.

“Macao is part of China and a gateway to Asia. The agreement of cooperation signifies an opening-up of our relationship with China”, said the rector of UFMG. According to Mr. Eduardo Vargas, director of International Relations of UFMG, this agreement began to brew in 2010, when the UFMG delegates were participating in the annual conference of AULP in Macao.

“As President of AULP, Prof. Campolina presented a proposal on establishing a fund to facilitate the mobility of academics and students across the Portuguese-speaking universities”, said Prof. Martins.

Prof. Rui Martins explained that the Macao SAR had been defined by the central government of the People’s Republic of China as a place of liaison with the lusophone countries. “The University of Macau serves as a platform for this cooperation in both the academic and business realms”, he added. One of the most important areas is the Portuguese language. “Our Department of Portuguese has established cooperation with the Brazilian and Portuguese institutions. Under the cooperation, several batches of students have been sent there on exchange programme every year to enhance the students’ understanding of the Portuguese-speaking countries and their cultures.”

Other important areas of cooperation include electrical and electronics engineering, namely microelectronics for which Prof. Martins is internationally renowned. 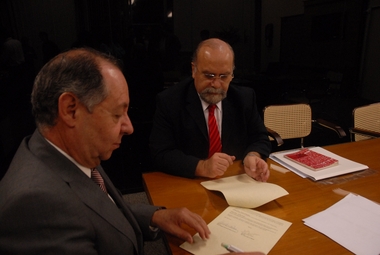