Vice Rector (Research) of the University of Macau (UM) Prof. Rui Martins has gained a recognized status in the international academic circle thanks to the impressive achievements he has attained over the years in the field of microelectronics, as well as his significant contribution to the development of UM since his arrival in Macao in 1992. Recently, Prof. Martins was unanimously elected as Corresponding Member of the Portuguese Academy of Sciences, signaling a new height in his academic career. The title of Corresponding Member of the Portuguese Academy of Sciences is equivalent in rank to Member of the Chinese Academy of Sciences. Prof. Martins is the only national member (Portuguese) in Asia.

Prof. Martins’s 30-year academic career started in 1980, including 12 years at the Instituto Superior Técnico / Technical University of Lisbon, Portugal, followed by 18 years at UM. The elevation to this important academic status has mainly taken into account his local career. He is also the first Academician to emerge from the UM academic staff ranks. His work at UM, as a normal academic, has involved teaching, research and service. He served as the Dean of the Faculty of Science and Technology at UM for three years. He has been serving as the Vice Rector (Research) of UM for 13 years. Besides this, Prof. Martins has created a research group with the respective laboratory in the field of microelectronics, leading to the training of tens of students at all levels (i.e. bachelor’s students, master’s students and PhD students.) with important research achievements gaining world-wide recognition. Over the past decade, Prof. Martins and his research group have obtained major results in the field of VLSI (very-large-scale integration) circuits design. One project was awarded Macao’s first-ever US patent. In 2008 Prof. Martins was elected Fellow of The Institute of Electrical and Electronics Engineers (IEEE) - USA, becoming the first scholar from Macao to have ever won this highest honor.

The Portuguese Academy of Sciences was founded in 1779, by the Portuguese Queen D. Maria I, and it is now known as the Academy of Sciences of Lisbon. When first established, the academy consisted of three classes (Natural Sciences, Exact Sciences and Fine Arts). Later, in 1851, it was reorganized into two classes (Science and Letters). Currently, each class has 35 members, 70 corresponding members (national), and up to 70 foreign members. Members are chosen on their merits in academic and scientific activities. The painstaking process of election involves submission of a proposal, discussion of the candidates’ curriculum vitaes, and voting at a plenary meeting specially convened for that purpose, and submission to the president of the Academy for final approval.

Prof. Martins was unanimously elected as Corresponding Member of the Portuguese Academy of Sciences, in the class of Sciences, 7th section of Engineering Science and other Applied Sciences. Currently the Academy only has 11 corresponding members in that class. Prof. Martins is the only national member (Portuguese) in Asia. This prestigious title, equivalent in rank to Member of the Chinese Academy of Sciences, is granted to distinguished individuals with major contributions in the academic field.

“That I was elected Corresponding Member of the Portuguese Academy of Sciences reflects international recognition of my academic career in its majority devoted to UM,” remarked Prof. Martins. “It is a personal distinction but also the recognition of the academic reputation of UM, which has risen consistently throughout the years. This would not have been possible without the unremitting efforts of its academic and administrative staff, as well as the students.” 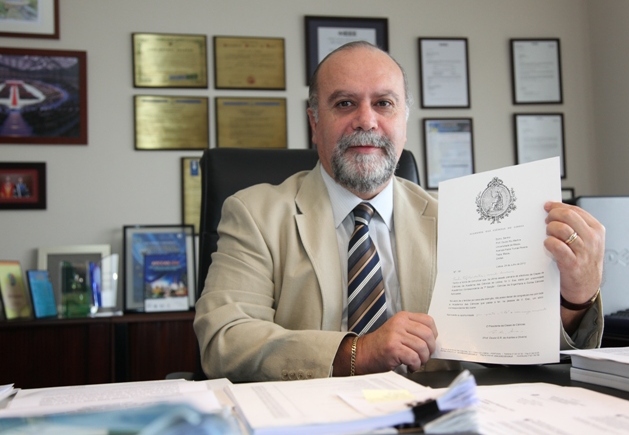