Relocation to the new campus will begin this summer holiday. The university library is expected to start moving in mid-July and to complete the relocation, cataloguing and stacking of over 600,000 copies of books within 21 days. Talk about mission impossible! This issue of My UM tells you how three years of thoughtful planning is going to turn the impossible into possible.

The library will carry out its relocation in two stages. The first stage, which is expected to start in mid-July and last three weeks, will be devoted to moving the most urgently-needed books, books from closed racks, back numbers and books from the rarely used stacks. The second stage, which is expected to start in October, will mainly be devoted to moving nonurgently-needed ancient books and newspapers.

The library currently houses an astounding number of collections, including about 500,000 copies of catalogued books, 150,000 copies of non-catalogued books, and innumerable journals and old newspapers. Library colleagues began preparation three years ago in order to make sure that the biggest relocation of books in Macao’s history can progress smoothly. “We will need to move about 40,000 boxes of items,” says Assistant University Librarian Dr Raymond Wong. “Unlike the current library, in which only one level is used as the stacks area, the new library on the new campus will have four levels dedicated to that purpose, and this presents a big challenge for us—how do we re-arrange the books from one level into the four levels? Before packing we need to accurately calculate the average capacity of each level while also making allowance, as accurately as possible, for future expansion of stacks areas. The fact that the current book racks have seven levels while those on the new campus will only have six also adds to the difficulty in moving.”

Library e-Database Will Only Close 1 Day

Many readers want to know how long the library will be closed due to the relocation. Dr Wong says, “When the library moved from the Ho Yin Centre to its current location in 1999, there were about 140,000 copies of books, and it took three months to prepare and two weeks to complete the relocation. Now we have three times more books, but by drawing on the experience from the previous relocation, we are confident that we can complete the relocation within three weeks.” He stresses that in order to involve the students in the process, relocation of some odd volumes of special collection books will be assigned to the students. “Not only will it be a wonderful opportunity to witness a historic moment in the university’s history, but it will be a good opportunity for education outside the classroom—we hope to let students learn how to organise a relocation project,” says Dr Wong.

UM Librarian Dr Paul Poon says: “We expect to start moving the books on 15 July, and during the relocation process the library will be temporarily closed. The new library on the new campus is expected to open on 23 July. However, teachers, students and non-UM readers will be able to continue to access the electronic database throughout the process. We believe the impact on students and teachers should be minimal since the move will take place during the summer holiday.” The library’s electronic database will only be closed on the last day of the library’s move so the server can be moved to the new campus, and the system will be re-opened on the new campus the next day.

The library currently has about 130 rows of books, with a total length of about 10 kilometres, equivalent to the length of two Friendship Bridges (Ponte de Amizade) joined together. The number of book racks will double after the library moves to the new campus. The current book racks will be converted into compact racks and stand by for use in case the new library needs additional racks in the future. To save time in dismantling and putting back together the racks, new racks will need to be acquired through a tendering process. Now with only six months to go, the library still has some slight concern about whether the purchase and installation can be completed before the relocation begins.

Starting this April, the library will launch a new book loan scheme, as part of the “Library Week” activity, but also in an attempt to ease the relocation workload. According to the new scheme, the number of books for loan at each time will be increased, and the loan period will be extended to six months. If you are a book lover and want to do something to help make the relocation process a little easier, just borrow more books. 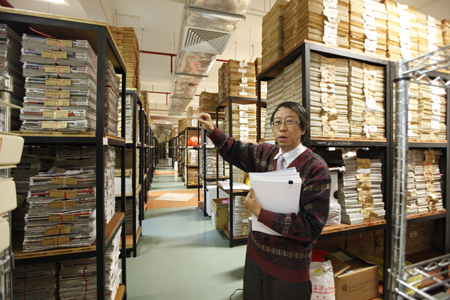